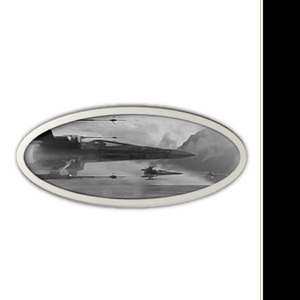 The Jedi looked with pity on Poe, who took another sip of brandy. When he put down his glass again, she took his hand. "You have not committed any conscious betrayal, Poe.

What has been done to you can only be done by someone who can use the Force.

I've already thought that this masked man is Force-sensitive when you told me about the shot hold in mid-air and your inability to move.

This man must be strong in the Force if he can manage both at the same time."

Dameron looked at her incredulously and continued with his story. "When I awoke from my deep swoon, a stormtrooper stood guard in the room.

A second stormtrooper came and said: 'Ren wants the prisoner.'

The stormtrooper released me from the apparatus, shackled my hands and drove me out of the room. I was prepared to die soon and I've only regretted that it wouldn't be in combat."

The name Ren made Nomi sit up, but she didn't interrupt Poe. It was now clear to her who was the man who had Dameron in his grip.

However, she didn't let it show and said instead: "Now that you're sitting here with me at the table, your escape must have been successful."

Poe nodded and took another sip of brandy. "I've already settled my affairs, because I was sure that the trooper would bring me to my execution. But then everything turned out differently.

He pushed me into a side passage and said that he wants to save me. I could hardly believe it. The trooper wanted to desert and take me with him.

He was in need of a pilot and asked me if I could fly a TIE. I answered him that I can fly anything, Nomi.

He took me to the hangar, where we actually climbed unhindered into a TIE, after he had freed me from my shackles.

Our escape had almost failed because the TIE was still anchored, but somehow we managed to get away.

Before we flew out of the hangar bay, we destroyed all TIEs and the hangar control bridge with the laser cannons."

He interrupted his narrative, emptied his glass, and handed it to Nomi. "Could I have another glass of brandy?"

The Jedi refilled the glass and gave it Dameron. Nomi felt that the alcohol did Poe good and took a little of his physical and emotional suffering.

She knew what sort of traces the grasp with the Force in a mind left behind on the soul, for she too had had to make this experience many years ago.

After another sip of brandy, the Commander continued with his narration.

"The TIEs were no longer a problem, but there were still the laser batteries and the rocket launchers of the Star Destroyer. I told the trooper how to use the TIE's lasers cannons.

When I asked him about his name, he told me only a letter-number combination: FN-2187. The poor guy had no other name. That was too long for me and I asked him if he agree to be called Finn.

From his reply I clearly heard his joy that he was no longer just a number.

We had just destroyed the laser batteries when the rocket launchers started to fire. I eschewed the incoming rockets while Finn fired at them. Then it happened.

Finn lost concentration when I told him we had to go back to Jakku and why. A rocket hit us, tore one of the wings apart, and we rushed uncontrollably toward the planet.

I activated the ejection seat and left the crashing landing TIE when we had reached the appropriate height to do so. Through the impact on the planet's surface, I lost consciousness.

When I woke up, neither Finn nor the TIE could be seen.

I beat my way to a village and finally got back to the base." Poe winced when he grabs again the glass filled with brandy. "I should better go to Dr. Kalonia, Nomi.

Maybe I broke a few ribs at the crash. It hurts badly."

The Jedi nodded. "Don't forget to tell her that you had two shots Corellian brandy. Didn't you actually look for BB-8?"

Dameron shook his head. "No, there were too many First Order troops on Jakku and I thought its droids tracking system was activated.

Unfortunately, they've forgotten to activate it before our mission, as I learned from the General. Everything has gone wrong, which could go wrong, Nomi.

The General was not pleased when I told her about my failure."

Dameron finished his drink and winced in pain when he stood up. When the Jedi wanted to help him, he waved her off. "I need no help, Nomi."

He went slowly to the door and turned again. "Thank you for listening to me and thank you for the brandy. Both have done good to me, Nomi."

Then he left the barrack to go to Dr. Kalonia.

When Dash came home from monitoring the simulator training, he saw a thoughtful Nomi sitting at the table. Before her was still standing the bottle with Corellian brandy.

He looked back and forth between the bottle and his wife. "You're not about to drink, honey?"

His wife looked up and shook her head. "Poe is back on the base, Dash."

Dash sat down to Nomi. "Ah, and you both have drunk on his successful mission."

"The mission has failed, Dash. Lor San Tekka was killed by Kylo Ren. All the villagers are dead and Poe was captured.

Previously he could give his droid the data store, but we do not know where the droid is now.

Dameron was tortured and Kylo Ren has entered his mind and now knows that BB-8 carries the map inside it. Together with a deserting stormtrooper, Poe finally managed to escape."

Dash looked at her aghast. "Damn crap, it could not have been worse for the kid."

His wife nodded. "You should have seen him, the interrogators of the First Order have done their job."

Dash muttered: "If the First Order is as good in torture as the Imps in the Civil War, I can imagine what Poe had to go through and what he now looks like.

" He sighed as he remembered how he had been tortured by Ysanne Isard and had thus lost his eyesight.

It was only because of the help of his wife, who used the Kaiburr crystal and the Force, that he could see again. But then he pushed these murky thoughts aside.

"Somehow I knew that the kid would get in trouble some day. The general won't be pleased."

"It can't be helped, Dash. Let's hope that BB-8 doesn't fall into the hands of the First Order."

Her husband nodded and replied, "That would be a disaster for the Resistance, if not for the entire galaxy."