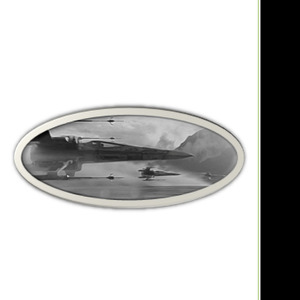 Many Dejarik games later, interrupted only by meals, which consisted of protein bars, lightsaber training and sleep, heard the triplets and Poe Nomi's voice over the intercom: "Prepare yourself,

we go back to sub-light speed. Shields are up, Dash."

After a little while the Glorious fell back in normal space and in the cockpit window was Ord Mantell to be seen.

Dash entered the coordinates of the landing spot that was several kilometers away from the supposed research facility of the First Order.

"If nothing has changed, then we'll get no problems. There's nobody who's asking about who's coming or leaving."

The freighter approached slowly the planet, which increased in size when they watched upon it in the cockpit window.

Finally, the Glorious immersed into the atmosphere and Dash steered she towards their destination.

Slowly the freighter landed on a hill that was located next to a volcano crater. Scarcely landed, Dash opened the hatch and lowered the access ramp.

Immediately they could perceive the sulfur smell, which invaded the ship.

The Jedi wrinkled her nose. "I can understand why the First Order has a research facility right here. No stranger comes here of his own choice. What a beguiling smell we've discovered."

Dameron responded: "We still don't know if there really is something here. Our informant could be wrong, Nomi."

The triplets shouldered their blaster rifles and fastened their lightsabers on their weapon belts, while Dash again checked his heavy blaster and put it in his holster.

The commander nodded. "Everything ready? Best we take the explosives with us now. As they were stowed in the rucksacks and the freighter was secured, they left.

Nomi looked suspicious to the ground on which the small commando unit was moving towards their destination. "I don't know, Poe, somehow it feels strange."

Dash, who had gone ahead, turned to her and said: "Here's the volcanic area of Ord Mantell, sweetheart.

And there are not only above-ground volcanoes, here the whole ground is hollowed out and in some cases are also magma chambers directly under the ground. So watch your steps.

Otherwise, our mission will be at an end sooner than expected."

They walked silently, weighing up every step.

Finally, they reached the end of the volcano area, which was bordered by a small chain of hills. Poe ordered his men to take cover and took out his macrobinocular.

He carefully scanned the surrounding area. The Jedi watched him and immediately noticed that the Commander had discovered something. He passed the macrobinocular to Dash, who also saw through.

The former mercenary whistled softly through his teeth. "The First Order apparently doesn't do things by halves. "Take a look, Nomi," he whispered and gave his wife the device.

When she looked through, she saw the entrance to a cave secured with a durasteel door, where two stormtroopers stood guard.

Dameron turned to the three young Jedi who had hunkered down right behind him.

"If the two troopers raise the alarm, it was all in vain. But we can't shoot them from here with our blaster rifles because of the clamor."

"Leave it to me, Poe," Corran said and crawled to his mother. He whispered something in her ear and the Jedi nodded.

A little later, Poe could see through the macrobinocular how Nomi and her son, always seeking cover, were slowly approaching the cave entrance and the stormtroopers from two sides.

Then everything happened very quickly. Mother and son broke cover, at the same time with drawn vibro knives, and attacked the totally surprised troopers.

The fight was short, and a few standard seconds later, the two troopers lay with cut throats, dead at the feet of their assailants.

Nomi looked disgusted at the corpse at her feet as she wiped the blood from her vibro knife.

She realized again that it made a difference, whether you were sitting in a fighter, destroying the faceless opponent with laser canons or if you kill him in a bloody melee on the ground.

She sighed as she looked to her youngest son, who also cleans his knife from the blood of the dead enemy.

Meanwhile Dameron gave Dash and his two sons the signal to advance and then he went ahead with his blaster rifle at the ready. They reached the cave entrance without incident.

There Biggs activated his lightsaber and began to cut a large hole in the durasteel with the glowing green blade.

The others were prepared to give him covering fire if any defenders would shoot on him from the inside.

And they weren't long in coming. Scarcely the hole been large enough to get through, the stormtroopers who were behind it opened fire.

Biggs jumped for cover while he fended off the shots with his lightsaber. Several troopers were hit by the ricochets and fell dead on the ground while the survivors retreated.

The Jedi waved his comrades. "Let's go in before they get reinforcements! This is the best opportunity!"

One after the other, the commandos jumped through the hole in the durasteel door, looking for cover in the narrow passageway, which opened before them. Poe, Corran and Dash Jr.

held their weapons at the ready, while Biggs and Nomi held their activated lightsabers to deflect blaster shots.

They advanced slowly, always reckoning with more stormtroopers they would come across.

Poe pointed to a spot on the wall, where two supporting pillars met. "We should place the first explosive charge here." As soon as he had said it, he get down to action. "Go on!"

The passage made a bend to the left. Dameron cursed when he saw the stormtroopers, who had entrenched themselves there and he jumped into cover. But he wasn't fast enough.

A shot hit him in the upper arm and he dropped his rifle.

He crouched at the wall with a pain-distorted face and said with clenched teeth: "Go on without me. I'm trying to get to the freighter. Here, Nomi, take the detonator for the explosives."

The Jedi nodded. "Yes, we'll end it now. See you at the freighter, Poe."

Then she approached the stormtroopers with activated lightsaber, which immediately opened fire on her. A quick glance showed her that Biggs was following her. His lightsaber was also activated.

Together, mother and son deflected the blaster shots and threw it back on the stormtroopers while Dash, Dash Jr. and Corran opened fire on them.

Soon the passage was filled with fire, smoke, and screaming of the dying and wounded. After a few standard minutes it was over. Nomi placed the next explosive and pointed forward.

Her husband and her sons climbed over the stormtroopers lying on the ground and continued their way into the research facility.

Nomi wondered how many stormtroopers she would still encounter while she placed at irregular intervals explosives at neuralgic points.

But there weren't more stormtroopers when they proceeded further in the facility. In the meantime, the Jedi had placed the last of the explosives and armed.

All she had to do now was push the detonator once they had left the complex to light it up. "Retreat!"

Nomi and Biggs went ahead, while the former mercenary and the two other young Jedi secured their retreat from behind.

Finally they reached the exit and climbed through the hole.

"Damn, they've called reinforcements!" Before the exit, they were expected by First Order stormtroopers. Nomi hoped that Poe had managed to get away in time, despite his injury.

Dash Jr. and Corran was immediately clear that they here couldn't achieve anything with blaster rifles.

They swiftly took their lightsabers from their weapon belts, activated them and shouted to Dash: "Father, get down!"

The four Jedi stood back to back when they realized that the stormtroopers were trying to encircle them. With their lightsabers, they deflected the blaster shots that came in swift succession.

As if in a trance, they parried every shot, until suddenly a ghostly calm prevailed.

When the smoke had cleared, they saw that no stormtrooper had survived.

Dash broke cover and saw the carnage, which his wife and sons had left behind. "C'mon, Nomi, let's blow up the thing and get out of here."

The Jedi nodded and pushed the detonator. There was a huge explosion when the explosives went off inside the complex.

Then they turned and began the return march.

When they reached the freighter without incidents, they were awaited by Poe. He had already treated his blaster wound and apparently had taken pain killers.

Nomi smiled when she said, "Mission accomplished, Poe. There are no survivors who could report that four Jedi were involved in the research facility's destruction."

Dameron nodded with a pleased expression. " "Well done, Blues, as I was expecting. Let's fly home."

A little later, the Glorious ascended in Ord Mantell's orbit to make the jump to hyperspace and to go back to D'Qar.