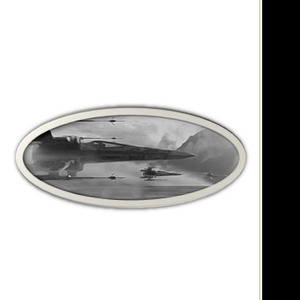 When they fell back in real space after three standard weeks they saw finally their destination: D'Qar. On this Mid Rim planet was the Resistance headquarters.

Nomi and Dash were relieved that it wasn't neither a desert planet nor an ice planet. Alongside them two X-wing appeared which in their design contrasted strongly from the old Incom T-65 models.

That had to be the new T-70 models from which Tarik had spoken.

Suddenly the two X-wings waggled their wings like to greet them and then a familiar voice was to be heard over the Outrider's com unit. "Hello Outrider, welcome to the Resistance.

I told you it wouldn't take long till our parents show up, Biggs. We accompany you to your assigned landing pad."

The voice belonged to their youngest son, Corran, who was flying one of the two X-wings and his brother Biggs was apparently the second X-wing pilot.

When they dipped in D'Qar's atmosphere they saw lush vegetation.

Nomi remembered vaguely, that during the Civil War two Imperial defectors, Thane Kyrell and Kendy Idele who served in Corona Squadron, had discovered the planet.

There was formerly a small Alliance outpost, which because of the end of war was never built out in a base.

Someone at the Resistance must have remembered this and now the preserved buildings and bunkers were used as headquarters.

Dash flew the space freighter to the landing pad and land it with half of the repulsors. His two sons landed their X-wings next to it.

Dash had barely cut the engines, when Nomi jumped out of her seat and hurried to the ramp. She was impatient for seeing Biggs and Corran. Her husband followed her slowly.

Meanwhile the two X-wing pilots jumped out of their fighters and hurried for their part to the Outrider. Biggs arrived first at his parents.

Nomi hugged her son, who smelled of lubricant like every pilot. Then she stroke gently the brown locks off his forehead and traced the scar with her finger which stretched out to the brow.

He was like his brother ripped and took with it after his father, despite his hair color. In this regard the triplets came after their late grandfather Ulic Bel-Baal.

Corran joined them and his mother hugged him as well. When she was about to ruffle his hair he ducked.

Nomi laughed. "I see it, Corran. You grew up to mature, strong men. Where has the time gone?"

Dash has joined them by now and hugged his sons too. It was obvious how proud he was of them.

"Why you haven't contacted us?", Nomi suddenly asked.

"Can you imagine how worried we were, after Luke told us what happened at the academy? We've found your brother and your sister by pure chance at Maz Kanata on Takodana."

Her sons looked guiltily to the ground, but then Corran looked defiantly up at his parents.

"We thought it would be better to go missing. Since the massacre at the academy we fled from one end of the galaxy to the other. We were always forced to hide in the Force to not be found.

You don't know what we've undergone."

"But you've still both arms."

The brothers hadn't noticed that during their conversation Dash jr. had approached them from behind.

"Why haven't you told me that our parents are on the way to us?"

Biggs pawed awkwardly the ground, while Corran concentrated at a point somewhere at the horizon. What need to be said? They've simply forgotten out of sheer joy to tell him.

Dash jr. slapped Biggs with his left hand on the shoulder. "No problem, little one."

Biggs muttered under his breath: "Don't call me always little one. Just because you were born a few standard minutes earlier than me."

Nomi contemplated her oldest son. He didn't looked so miserable like on Takodana. Since he

had the new prosthetic arm, he seemed to recover. Dash jr. had noticed his mother's glances.

"I've improved a lot, Mama. And I learn step by step to handle this thing. You can't imagine how many things I've broken the first time when I've grabbed them with my right hand."

He couldn't suppress a grin. "Someday I've even pried a piece out of the meeting table, when I stood up and supported myself on it.

But now I'm even able to handle my blaster rifle without breaking it."

Nomi smiled. It seemed her eldest put up with his artificial limb.

"I think she's with Red Squadron on patrol.", answered Biggs. "We didn't serve in the same squadron. Tasherit wanted by all means to be part of the Reds, father."

At this point a lieutenant approached them. "Commander Darklighter, Major Rendar, please follow me. Commander Dameron had learned that you've just landed and is waiting for you in his quarters."

Nomi and Dash took leave of their sons and followed the lieutenant.