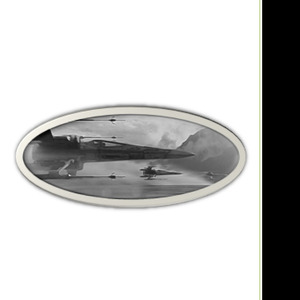 The Outrider approached Jakku after an eventless journey through hyperspace. Nomi looked curiously out of the window, when they entered the planet's atmosphere.

A bored voice was heard via com.

"Landing permission granted, Outrider. I'm transmitting the co-ordinates. And I advice you not to depart from them."

When he cast a glance at his wife, he noticed her slightly disgusted expression.

Nomi's eyes were wandering over the endless sands, where relics of X-wings, TIEs and even a Star Destroyer stuck out. At Jakku there must had been a great battle during the Galactic Civil War.

"Why of all things must it be a desert planet? Again constantly sand in the clothes, in the boots, against the skin and between the teeth. I don't like this, Dash."

When hearing his wife's complaining he laughed.

"Hey, why are you complaining? It must be like home for you."

"That's what bothers me exactly."

Dash unbuckled and rose from the pilot seat.

"Ah c'mon, it's a nice variation from the swamp hole we call home now."

Nomi poke her tongue out at Dash, when she abandoned her seat. Together they walked to the entry ramp. Dash pushed the button and the ramp lowered slowly and crunching.

Yes, time had not failed to leave its mark on the freighter as on its owners as well. The ramp was hardly down, when the hot desert wind met them. Dash looked cheering at his wife.

"Go ahead and don't forget the data store." Nomi pointed at a little purse, she was about to ease in her coverall's neckline. They looked around.

Apparently they were landed in the middle of nowhere. But then they saw one kilometer away something that looked like a settlement.

'Great,' Nomi thought, 'now we have a walk before us.'

Dash closed the freighter and activated the intruder alarm. If someone on this backwater planet should try to enter the Outrider he would get more than he has bargained for.

Nomi cursed under her breath when she trudged through the desert sand. She hadn't anticipated to do it ever again. If it had been up to her, she could have forbear to doing this.

But it was about doing an old friend a favor.

Finally they reached the little settlement. Other than on Nomi's home planet Tatooine, the hovels were built from scrap, which the dwellers had scavenged from the battlefield.

Purposeful she went to a little hovel, where an old woman was sitting in front of. Those woman looked curious at them.

As Nomi and Dash stood in front of her, she narrowed her eyes to a slit in order to see better and laughed.

"We aren't often visited by foreigners."

'No surprise, it's far worse here than Tatooine,' Nomi thought.

She smiled friendly at the old woman. "We seek Lor San Tekka. Do you know where we can find him?"

She hummed silently to herself and Nomi felt that Dash was on edge.

"Or do you know somebody, who can help us in any way?"

The old woman put her off. "Just a moment. The youth, always being in a hurry. You said Lor San Tekka?"

"Yes, LOR SAN TEKKA." Dash bursted with anger. He had the feeling to stand already an eternity in front of the hovel in the sun.

He bended over to Nomi and whispered: "It's like pissing in the wind, Darling. The old woman isn't in her right senses."

Nomi was about to respond, when the old woman smiled and nodded. "Lor San Tekka, yes I know. You can find him 15 kilometers from here in the settlement Tuanul situated at the Kelvin Ravine."

Dash mumbled: "Why didn't she tell us that in the first place?"

Nomi smiled at the old woman. "Thank you, you've helped us a lot."

The old woman smiled back and pointed at the lightsaber dangling from Nomi's belt.

"I've last seen those weapon since eternities. And I've never thought that I'll see it again.

May the Force be with you, my dear child."

While the old woman still marveled at the weapon, a young man stepped out of the hovel's shadow. "Who do you talk to, grandma?"

The old woman pointed at Nomi radiant with happiness. "Look, Roan, a Jedi. And you thought I've told you myths. They are for real. It's all true, what I've told you."

Roan couldn't suppress a smile over his excited grandmother. Those continued agitated: "They want to go to the settlement at the Kelvin Ravine."

Her grandson looked quizzically at Nomi and Dash. "15 kilometers through the desert on foot? This should be difficult, even for a Jedi. I can borrow you my speeder. Come with me.

It stands behind the hovel."

Nomi and Dash followed him. Roan pointed at the speeder with proud, which wasn't one of the common standard models, but built up by scrap. The vehicle didn't look confidence-inspiring.

Roan caressed the speeder lovingly, which looked if only its owner's willpower is holding it together.

Roan must have seen Dash's expression and he was eager to affirm: "The speeder is trustworthy. Believe me, it may look like a piece of junk, but this deludes."

Before Dash could respond Nomi had seized Roan's proffered hand. "We take the offer, Roan. Thank you. Come, Dash, we have no time to spare, if we want to arrive before the greatest heat."

Despite his age Dash jumped in the speeder and patted the passenger seat inviting.

"C'mon Darling, what are you waiting for?"

When Nomi had settled in, her husband started the engine, which responded against expectation immediately. Roan touched Dash's shoulder.

"And another thing, beware of the Sinking Fields at the north. The sand would engulf you there. May the Force be with you."

"May the Force be with you too. We'll bring the speeder as soon as possible back."

Then they headed toward their destination, leaving a cloud of dust behind.