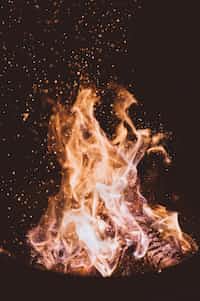 mysticalmagic ✨ Follow your heart, Follow your magic ✨
Autoplay OFF   •   5 months ago
Transcript Use Images
Part 4 of the colllab me and @nightsong are doing.
silverain's povdewspot's pov

Silverain flicked her ears toward the direction of where their cave was and Dewspot ran in that direction, slipping a little on puddles. Thank god it wasn’t raining anymore. "Bye!" Dewspot shouted to the cats while sprinting ahead of Silverain. Silverain looked over at the one white one with the red eyes. He looked very attractive for a cat like him. "Well . . . will you guys join us?

Maybe you can meet our mother and our father." She spoke. The cats looked at them. "I don't know about that." Night pronounced. "Me neither." Ice agreed, cuddling up to Night. Dewspot came back and twitched her whiskers. "Will you join us please?" "Okay!" The red eyed cat meowed, standing up.

Silverain still didn't know what the cat's name was. Earth studied Silverain for a moment and spoke, "I will check it out." nodding his head to her. "Night? Ice? Please come." Night and Ice exchanged glances and they got up. "Okay. You better not be leading us to a badger den." Night teased. Silverain smiled and let Dewspot run ahead of her again.

Rain and Earth ran beside each other except Ice and Night were together by themselves.Flame was by Silverain. Flame! Silverain ran and then realized that Flame was running beside her. She flushed red and looked away. She didn't want to let him know she liked him. He didn't seem to like her in her opinion.

Every cat was split up and we all became rogues, Loners, or kittypets." "Oh . . . I-i am so sorry. I don't know what moons are though. Do you mean 6 years? That's my age too. I am younger than the others." Dewspot smiled. "That's nice. What's up with Night and Ice?" she asked, jumping over a long log, hearing everyone do the same.

"Night and Ice? I think they are mates. They clearly don't think so but I know they are." "Oh . . . um . . . are they both gay?" she asked, nervously. She didn't want to offend anyone. Earth snorted. "Of course!" he studied her. "Wait . . . did you think they weren't?" "Yeah. I thought Ice was with Flame." Dewspot said, looking over at Earth for a second.

He seemed very fond of her which she liked. She wondered oddly If she liked him back. Then she thought for a moment, Of course you do. He is very handsome. Dewspot felt her face burn red and looked away again. "No. Ice and Night are together. I think Flame might like your sister though." Earth explained. She stiffened, seeing the family cave up ahead. "R-really?"

"Yeah. D-do you like anyone?" Earth asked, looked down at the leftover rain and grass. "I . . . I like someone. I don't know how much though." Earth nodded. "Who? Or do you like someone from your clan?" he asked, frightfully. "I like you I think. "Dewspot answered, licking Earth's ear. Earth's face went red easily, love and compassion shown in his eyes. "I-i like you too. Maybe more than that."

Earth said, licking her on the mouth. Dewspot was surprised at first but she licked him back. "Dew! Silver!" A voice rang up ahead. It was Dewspot's and Silverain's mother. "Mother!" Silverain and Dewspot echoed running over and rejoining with their mother.

"Why are you out of the cave?" Silverain asked, nervously. "'Cause I was wondering where you two went." The mother looked up to see the five cats. "Who may you all be?" All of the cats said their names and Mother twitched her ears. "Nice . . . Why have you all come?" Rain spoke. Dewspot hasn't seen the cat speak once. "We came because your daughters invited us." Rain replied. "Hmm? Did they?" Mother glared at the two cats. "Come inside everyone."

Silverain's Pov Silverain put down nests for every cat and sat in one, studying her mother. Her mother's belly was huge. She knew her mother would have her kit or kits soon. "Hi my Silver." Father said, bounding over to her. "Hi, Father." Silverain replied. "How is mother? She seems ready to have kits soon."

Father twitched his ears. "Yes. I have been trying to tell her to stay in bed but she won't. She keeps denying she will have the kits soon. I am afraid the kits will come today or tomorrow." Silverain widened her eyes. "What?! Today?" "Yes. She seems very ill. I'm glad your friends and your sister came fast. We need to stock up on herbs, especially poppy seeds, thyme, and cobwebs."

Speaking of having the kits, a moan came from Silverain's mother. "Mother?! Are you alright?" she asked, helping her mother into a nest. "Yes. What's wrong with her?" Night asked, tail entwined with Ice's. "I-i think she's having kits . . ."Dewspot answered, paling. Silence settles in, except the moaning and groaning from Mother.

"Don't you think it's too early?" Silverain asked, frightened. "Yes-" Mother said before moaning and yelping again. "They are coming!" she shouted, screaming. Silverain yelped. Every cat besides Dewspot, Silverain, and Father began panicking.