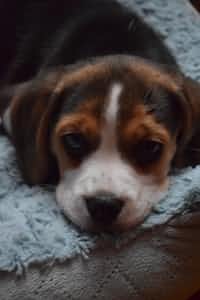 Snickers is a beagle puppy. She is a stuffed animal but she has personality.

Snickers likes cheese, and she is playful. She was a member of the PAW Patrol as the medic, but Misty (another character, i have two books of her i will share later) took over.

My friend's beagle, CC, looks like Snickers. And another friend at school said "That's the dog from Pretty Little Liars!"

IDK what that is, or if it's true. But Snickers must be lucky to be on that movie or show

Snickers has a boyfriend, named Choco, and here he is.

Snickers has a cat friend named Dorito, he's somewhere hiding with Scout the German Shepard, who's his girlfriend.

Snickers doesn't like these mouse stuffed animals in my closet..