Commaful
Where the Mushrooms Grow 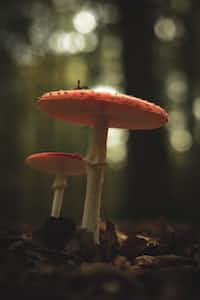 mossenthusiast Community member
Autoplay OFF   •   5 months ago
Transcript Use Images
You couldn't ask about the cottage. That was the best way to ensure you'd never find it. It had to be referred to you, consent communicated to the referrer by how the shadows were cast or the direction of the rain that day.
fiction adventurefantasylgbtq

Where the Mushrooms Grow

You couldn't ask about the cottage. That was the best way to ensure you'd never find it.

It had to be referred to you, consent communicated to the referrer by how the shadows were cast or the direction of the rain that day.

Germ had not created the cottage, but they had discovered it. It was a giant tree stump next to much smaller trees. Inside grew tiny little mushrooms.

That was usually why people came looking for the cottage.

The mushrooms' abilities had presented themselves to Germ by pure luck and accident. Germ was starving, the snow had forced their door shut and their windows useless.

They had been inside for seven straight days and, while the snow provided more than enough water, it provided no food. In a fit of desperation, Germ had eaten the mushrooms.

Seven hours later, Germ would never be the same.

Clearly, Germ had not been the first to experience such a phenomenon. They would encounter travelers in the local forest asking directions to the stump, or, better yet, the mushrooms.

Germ, always the friendly neighbor, would open their mouth, but then the leaves would rustle a little louder or the birds would chirp a little different and suddenly Germ would shut their mouth,

offer a smile, and shake their head in solidarity.

Until one day, there was a rumble and a sputter and what appeared to be a motorized bike ambled into view,

weaving between the mosses and stones with a delicacy almost impossibly congruent with its size and demeanor. Germ stared at the machine, certain that they had seen it before. Motorcycle.

It was like a car, but on two wheels. Germ wondered what a car was.

The rider dismounted, radiating the same contradictions as the vehicle. He caught sight of Germ, with hands full of nuts from the autumn harvest, and nodded.

The nuts clacked together agreeably, and Germ felt their mouth fall open as if it had been waiting Germ's whole life for that very moment. "Do you want to see the mushrooms?"

From the outside, it would seem that the Rider was far too large to fit in Germ's humble abode.

As he reached the door, however, it seemed he was the perfect size, not even ducking his shaggy-haired head through the door. Germ gestured to the fungi dotting the walls.

"I've only had the green ones, but it seems like you might be more of a purple guy." Somewhat hopelessly, they added, "I have no idea how I know that."

The Rider chuckled. "That's why you know."

Germ tilted their head. "You're the first person I've ever invited in."

"An honor I don't take lightly. You shouldn't take yours either."

"You've eaten them too." The Rider peered at the midnight-colored mushrooms before sitting down, lacing his fingers on the log table.

"Aren't you going to have them?"

"I thought I'd wait for you to prepare your nuts. Some riders do have manners."

"How much do you remember?"

Germ dropped the nuts into a pot over the fire. "I remember a lot. When to harvest the nuts, the times the sun sets every day, the way to the river -- "

"Not like that. From before." Germ paused, the weight of the Rider's words sinking in.

"I..." They trailed off, thinking hard. "I remembered motorcycles. But I don't remember cars."

The Rider nods, taken aback, but not surprised. "How did you know?"

The Rider shrugged. "I've been around." He looked pleasantly around the cottage as if it were a family home he hadn't visited in some time. He had a tattoo of a bear on his neck.

His fingernails were clean. A proud pop sounded from the pot, and Germ rushed to lift it off the fire. The Rider plucked a mushroom from the wall as Germ settled themself across from him.

"To your purpose," the Rider toasted as he tossed the mushroom into his mouth.

"And yours," Germ added uncertainly.

The Rider's pupils dilated, his enormous fists clenched. Lightning struck the room. "They're coming. You'll have to go soon." Then he blinked, shaking his head. "How long was I out?"

"What the fuck?" Germ stared at him from across the table. "I was out of my fucking mind for at least a day. Maybe a week, I don't know."

"I don't even know where Michigan is. Also, who's coming?"

"You said someone was coming. And that I had to leave. Who? And where do I go?"

The Rider listened blankly. "The next person who comes. They'll know. They'll take you there." He nodded, sure of himself.

"Cool. Thanks." Germ studied their hands, trying to figure out if they had goosenuts in Pinckney, Michigan.

"I'm going to leave the bike. I think you're going to need it." The Rider stood up abruptly.

"Are you leaving?" The Rider nodded. "We'll meet again. Once you get there." He strode to the door and melted into the evening shadows. The goosenuts popped in their basket.

The next time, Germ was down by the stream, their basket almost full of hearty reeds. "Do you know where the mushrooms are?"

Germ didn't even turn their head. "No, sorry." Germ listened to the steady sound of disappointed footsteps padding deeper into the forest.

"I think I'm supposed to ask you for a cup of tea." Germ turned to see a woman in a mechanic's uniforms, her face set in a permanent scowl.

The Mechanic looked around Germ's habitat. "This is where you live?"

"Hardcore." She sat down, popping a goosenut in her mouth. "Not to sound weird, but I think I was born in a place like this. Which feels incorrect, because I've never left Jersey."

"What's Jersey?" Germ nodded towards a bunch of red mushrooms. "Those are for you."

The Mechanic regarded them warily. "I hate that that makes sense."

"It's easier if you eat them all at once."

The Mechanic sighed, then bit into the mushroom. Pupils dilated, nostrils flaring, she stood up. "We have to go."

Her eyes were back to normal now. "What?"

Germ drank in their house, its single room with its infinite uses. The fire in the corner, the bed against the wall. "We have to go." They stood, grabbing the Mechanic's hand.

The motorcycle was ready to go, resting in a bed of soft grass. Germ started towards it.

"Wait." The Mechanic didn't move. Germ turned back to look at her. "I think you need to take the mushrooms."

Four minutes and nine seconds later, Germ had one of each mushroom stowed in their pocket.

As the motorcycle groaned into the trees, the stump seemed to shrink to its normal size, a size that could have never been anything greater than ordinary.