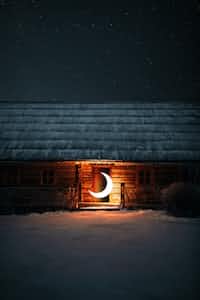 Twas the night before Christmas, and all thro' the house, A foul creature was stirring, and ate the last mouse. The candles were lit and placed with utmost care, In hopes that Great Öglethrax would visit them there.

The children were nestled, dreaming dreams without dread, The last living Shoggoth hid under their bed. My wife in sheets as I sat by the fire, Waiting patiently for events to transpire.

When out on the lawn there arose such a clatter, I sprang from my chair to see what was the matter. Away to the window I flew with a flash, Tore open the shutters and threw up the sash.

The moon stood breast on new fallen snow, Gave a red hint on the surface below. When what to my curious ears should hear, But the clanging of bells and horrid screams of fear!

With a shiver and quiver, I couldn't relax, So I knew in my heart it was he: Öglethrax! Faster than bats, his children they traveled, As he boomed a voice deep and like gravel.

"The time has returned, for I to arise," His scales grew red, slits formed in his eyes. "Äh, now fly, my children, fly to the skies, My servants have long waited for their prize!"

Like Great Yig, he slithered, as long as the horizon, His head rattled like bones with the hair of a lion. He scaled the rooftop, trailing green slime, Lugging a sack, old and worn from time.

And then, with a cackle, I heard on the roof, Snarling and hissing and the patter of each hoof. I rubbed my burnt eyes, turning around, To see the Great Giver as he fell to the ground.

Tendrils green like lime, and a tail a foot tall, Stomped out the fire with a spindly little crawl. Eight spider-like legs would furiously tap, A pulsating mushroom head that resembled a cap

Eyes like cats, breath cold like mint, His nostrils glowed an unnatural tint. He eyed the sacrifice, giving a ground-shaking cackle His children swept it up with the howl of a jackal.

They sucked the body dry, before eating meat, Crunching the bones as I witnessed their feat. Öglethrax smiled, his eyes shined like stars, While his children flew back up and hid amongst cars.

White fur bordered his skin like a winter robe, His hair were like dreads and thicker than rope. His teeth were yellow, fangs sharper than knives, Nails brown with dried blood of snuffed-out lives.

His prized sack, he held with one hand, Was wrapped tightly with rotting flesh of man. His body was riddled with dragon-like scales, His back grew wings, feathers like quails.

Without words he thanked me, for feeding his kin, Placed a hand on my shoulder, scratching my skin. He paced the room, making horrid sounds, His thin, grey tongue almost touching the ground.

With a foreign click, he dug in his sack, Pulling out strange items that he placed on the rack. The stockings, he filled, with knick-knacks and bones, Which glowed different colors and hummed special tones.

With a hush, he crawled up the chimney, the fireplace ablaze, Touching the stars and catching my gaze. "Great Öglethrax," I shouted, "I'm grateful for this!" He replied by shattering my windows with a hiss.

His children flew up, joining him in the night. He shouted, "I shall return, when the stars are right!"