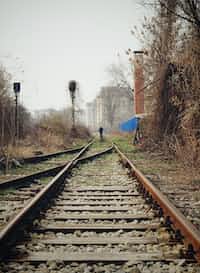 michellethomas2 Mystery lies in the darkest of places
Autoplay OFF   •   4 months ago
Transcript Use Images
Rebecca starts laughing, "Do you mean zombies?"
thriller zombiezombie apocalypsezombie+apocalypseapocalypsenightmareshort storyshortstory

Officer Mooney grips Rebecca's arm and forces her to her feet. "How did you get out of that cell?" He spits; saliva hitting her cheek.

Rebecca can feel her arm bruising under the burly mans fingers. "It was unlocked." She angrily replied, trying to get her arm free. The large man releases his grasp, "You know what...

it doesn't matter. We have to stick together right now." Mooney walks to the window. A look of terror upon his face as he peers out.

"Why do we have to stick together?" Rebecca wonders, rubbing her pained wrist. The officer rushes to the armory and loads weapons into a duffle bag. "Everyone is...um...sick."

He stumbles as if he can't find the word. "Like the flu, sick?" Rebecca takes a shotgun off the wall. Mooney snatches it from her and shoves it into the bag, "Like eat your brains, kind of sick."

Rebecca starts laughing, "Do you mean zombies?" Mooney stands and glares at her, "What exactly are you laughing about?"

Rebecca walks to the window, still laughing at Mooney's statement. Just as she peeks out, a rotting human face appears on the other side of the glass.

There's so much blood and decay, she can't discern if it's a man or a woman. Jumping back in fright, Rebecca stumbles over a wooden desk chair. There's a loud crash as she falls.

Officer Mooney helps her up, but is visibly upset. "Oh now you've done it!" He shouts, shoving a gun into her hand. "Sorry I didn't mean to." Rebecca exclaims. "There's someone out there. They look injured."

Rebecca starts for the front door when she hears it -- moaning. Assuming it is coming from the person just outside the window, Rebecca continues heading for the door.

But the growing noise stops her in her tracks. She turns to find Mooney standing beside her. "What is that?" She asks Mooney, who is grabbing a shotgun from the duffle. "Whatever you do..."

He cocks the weapon and points it at the door, "...don't stop shooting until they're dead." Rebecca's stomach turns, "...dead?" She feels faint, and then everything goes black.

The sound of gunshots jolts Rebecca awake. Jumping to her feet, she dodges a falling zombie. "C'mon pick up the gun and help me damnit!" Mooney shouts while reloading his weapon.

Rebecca begins to cry, "I cant! I'm not a killer." She hides under the desk next to her, closing her eyes and covering her ears. She wishes she were back home with her parents.

Mooney appears in front of her, "Hey! Do you have a death wish?" Rebecca uncovers her wet face, shaking her head.

"Then get out here and help me kill the damn things!" Mooney turns back to shooting into the hoard, pulling them away from a vulnerable Rebecca.

She climbs out and looks upon the scene in horror. She points her gun at the zombies now running towards her. Rebecca realizes her aim is atrocious but continues shooting nonetheless.

Eventually her gun empties, only two bullets connecting with the undead. Rebecca tries to run but is grabbed from behind. The zombie bites her and she falls.

Thank you so much for reading part 2!! The 3rd and final part will be out shortly!! Please let me know what you think in the comments and don't forget to hit the thumbs up!!