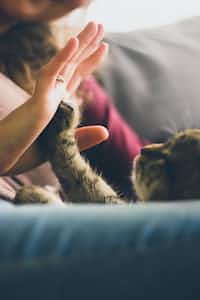 meghnapal03 Community member
Autoplay OFF   •   7 months ago
Transcript Use Images
Maybe one day their now far off dream would come true, and they'd finally be able to embrace the two dearest to them.

They weren't exactly fond of the outside,

For them stepping out of the comfort zone of their abode seemed as if they were entering a game full of risks where with every single contact they'd lose their health points.

Outside it was boisterous, there were always people in motion and that very thought and sight made their skin crawl.

It was a wonder, they sometimes thought, how they had ended up sharing a flat with another person, when in fact they had an aversion to people.

They stopped thinking for a moment; aversion to people didn't seem about right since it wasn't as if they disliked people.

They were very fond of their parents, their few friends and their housemate. But again, what they did dislike was being in close proximity to anyone.

With a clouded mind they made their way outside of their flat, their safe zone.

But they had to.

Buying groceries was necessary; they didn't exactly have the heart to serve convenient food to their housemate who had unfortunately been working overtime since past few days,

and even more so today, since their housemate would be bringing in another companion.

The moment they stepped outside they felt chill run down their spine, the cool air and the chilly weather indicating that winter had begun.

Quickly locking the door to the flat, they rushed their way to the nearest supermarket, the faster they were done the better, the lesser contact they'd have with people the better.

But it seemed as if their luck only remained for a short while, the relief they felt when they found the sparse crowd on the streets faded away once their sights laid on the horde in the mart.

They flinched away when a lady suddenly rushed past them; they didn't wish to deal with this situation and wished to turn away from it all; only for the thoughts of their housemate to rush in.

They huffed in mild annoyance, which ended up coming out shaky.

With a slow pace and alert mind they made their way around the mart, picking out whatever was needed, successfully avoided coming into contact and finally reached the cash counter, where the staff finally started to tally their items.

Now that they stood void of any motion, the fact that their breath had started to become labored and they could practically hear the beating of their heart had sunk in,

an indication that they had to get out, and fast.

They snapped out of their trance when a hand came into touched with their own; startled by the action they quickly snatched their hand away from the counter top, shocking the staff in the process.

Realizing their hasty movements, they hurriedly paid the required sum and whisked away the bag full of groceries, not before uttering a soft apology to the cashier.

They ran out the supermarket, barging their way out and unfortunately coming into contact with countless strangers in the process.

With their now trembling form, they made their way to the nearest benches and pulled their phone out, considering the option to call their housemate to pick them up.

Opting out of the choice they shoved the device back into their pocket, they did not wish to bother their friend amidst of her work.

Slowly as distress arose within them, they clutched the hem of their jacket as if the action would give them support.

They stayed unmoving for a few moments before finally deciding to head back home. They felt colder than usual, far too cold for what they'd expected from winters in their region.

They still felt uncomfortable and wished to drop down and sob, but they couldn't, they were still out, they needed to get home quick.

With hands tightly clutching the bag of groceries, wet eyes and a burning throat they finally reached their safe space.

Dropping the bag of the table and tossing their jacket away, they grabbed the duvet and enveloped it around themself, as they plopped onto the couch.

Their heartbeat had finally calmed down when their eyes fell upon the delivered boxes kept right across them.

Each box was full of contents necessary in order to raise a kitten, or so their housemate had said.

She would be bringing in the new addition to their dynamics today, and while they should've felt excitement coursing, they only felt the dread settle.

What if they scared the little kitten away, what if they unintentionally end up harming the kitten,

what if they were unable to give the much needed affection their little companion would need?

Such scenarios swam in their head as they sat tight, burying further into the duvet and trying to shake the negativity off.

About an hour passed and the clock was about to strike nine.

They heard the rattling of the keys and the creek of the door. Their housemate quickly took of her shoes and put the pet carrier on the floor near the couch.

She looked up at them in excitement as she opened the tiny door of the carrier. With gentle hand she took out a grey tabby, cozily wrapped in a small but seemingly warm blanket.

Double taking at them, their housemate joked at how similar they and the precious fluff in her hand looked, all cuddled in warmth.

They finally broke into a smile for the day, their housemate had effectively chased the tenseness they had previously been feeling with their little quip and lazed smile.

She dropped on the couch, next to them and placed the bundled little kitten onto her lap.

She spoke of how she had visited the little blob of fur without fail at the shelter, which was the reason why the kitten had already warmed up to their housemate.

Tenderly, she scratched the kitten's chin and looked at them with encouraging eyes, telling them to offer their hand to the furry friend for a sniff.

Hesitantly they did as their housemate instructed, only for them to get a surprise lick from the little animal.

Their housemate smiled as she shifted closer to them, to allow better access but only for them to freeze up at the proximity.

Their housemate now looked apologetic, for drawing too close in the spur of the moment.

She turned towards them, reassuring them that they could approach or keep a distance as they liked, that they had the power to choose.

Her words made them feel better, a bit more comfortable as they gathered the courage to inch closer to their housemate and slowly subbed the kitten on its head and between its eyes.

The little fluff too flinched a few times before burying itself back into the blanket.

Their housemate gave out a huffy laugh at their awkward interaction, saying that the cautious creature would take some time in order to adjust to its new home.

Sulking a bit, they drew their duvet around themself a bit tighter.

"You both truly are similar," their housemate chuckled, as her hand hung near to their head, offering pats.

They huffed as they accepted the gentle caresses to their head, missing out how their housemate's eyes widened at them unconsciously giving into contact.

Maybe the little kitten and they really were similar and maybe they'll learn a thing or two from their new companion.

Although it sounded like a far off dream, maybe they'd become comfortable with people one day and if they stretched a little they would embrace the two in front of them,

they surmised as they gazed at their housemate and the now sleepy kitten which purred in content.