Commaful
He and She 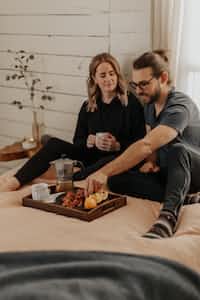 manasikadam Glue Stick and Scissors
Autoplay OFF   •   a year ago
Transcript Use Images
He and she, He and she
poetry lovepoetryworldcrisis#interdivisionlifepoethashtag most romantic hashtag poems

Together they were a beautiful sea.

Belonged to a society so mean and clean,

Hence, they remained for years unseen.

she was crazy, rich and a rebel,

He was quite opposite in the shell.

It was through the buttons they talked,

Liked photos and then they stalked.

Later decided to meet at a spot,

and they chatted as they walked.

One fine day, with a glass full of wine,

He looked into the eyes, so fine so divine.

So naïve and versatile,

He would call her, "the lily of the Nile"

He on contrast, was a simple boy, who loved to sing, to dance and smile.

She was the thunder,

He was the rain,

Knowing, together they would never sustain,

Still were attracted in ways unexplained.

But to the fate, it was never a possibility

They fought the wars and the atrocities,

Blamed of denial of their religion,

Spreading fires across their divisions.

A poem couldn't speak all of the truth,

You have to have faith on the bloom of the youth ,

You and I are one in a ball

Humans are, in the end, the creators of this brawl,

Be aware of the impending fall,

One such that, you would never want to recall. ~Manasi Kadam