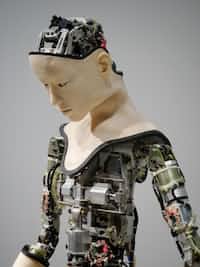 lovely12507 Community member
Autoplay OFF   •   9 months ago
Transcript Use Images
cyborg girl's secret is safe with this guy but is she really Gwendolyn. And if so how did she become a cyborg? And who is the woman's husband, the father of her other child?
fiction robothumanwarmemory loss

"Who are you? Or better yet what are you?" His voice is deep and intimidating.

"I-I don't know." I decide to answer him honestly. If he even thinks that I'm lying he can report me and I would put Jade and her father in danger.

"What do you mean, you don't know?" He demands

"I woke up some miles away from here and couldn't remember anything. I seem to have lost my memory and Mr. Shay helped me by letting me stay here." I tell him. "Please don't tell anyone.

I can leave and never come back. No one will even know that I'm here. I don't want anything bad to happen to Mr. Shay. He knows that I lost my memory and he just wanted to help."

"Fine. I won't tell anyone. Jade's dad doesn't seem like the type that would help robots. And you won't get that far without being noticed anyway.

There are many different human towns around here. You're just lucky that Jade's dad lives on the outskirts of town."

We just stand there in silence for a while until he speaks up.

"Shouldn't you have back up memory files or something like that?"

"I don't think my brain works like that. I might be part machine but I'm not completely a machine either. I'm still partially human." I tell him but how can I confirm that. That a part of me is still human.

"Although I have some sort of display thingy in my head."

"What's that supposed to mean?"

"When I woke up some sort of display screen activated in my head. I was able to see a map. That was how I knew that this building is here."

"I guess I'll go back to my room now." I say and walk towards the door when he grabs my arm. I start to feel strange tingles where his hand is. "What?"

"Aren't you going to eat?" He asks and I'm confused.

"You've walked back a long way and eating hasn't even crossed your mind?" He lets go of my arm.

"You said it yourself that you are still partially human. It wouldn't make sense for the person who made you like this to tamper with your digestive system."

"Look, I'll eat later. I just finished having the most annoying conversation with Jade and I don't think I can eat anything."

"What did she say?" He asks and when he sees my confused look he says "Jade"

"She basically told me that she thinks I'm evil and that I'm pretending. She also told me that I'm a freak and I think she's right."

"I think she's right. I'm a human with robot parts and a computer in my brain. I was probably made for destruction. To kill and harm human beings.

Plus, just thinking about who might've made me makes me feel even worse."

"I appreciate your silence and your concern but I'm as fine as I can be. So I'll be heading back to my room." I say and leave before he can say anything else.

"Hayley, I need you to join me. If you aren't with me then you're against me." He said to a blonde woman who was holding a sleeping baby in her arms.

"Victor. I've told you many times before. I can't join you. If I join you then what will you do.

Kill my family along with what's left of the human race? After that what would happen? We live as the only human beings on a lonely and isolated planet? I just can't Victor.

I don't think what you're doing is right. And I also need to think about my daughter.

What would I tell her? That I left her actual father and got together with the man that killed him? Along with the rest of the human race? I've told you before and I will tell you again.

I can't be with you. I have another daughter who is hardly even two years old. And she lives with her father who I am still in love with."

"Hayley, you need to see sense. The only way you will survive what is going to happen is with me." He pleads with her.

"No, Victor. It is you who needs to see sense." She walks over to him and uses her free hand to touch his arm. He looks up and his green eyes meet her blue ones.

"If you stop all this now, everyone else may not forgive you but over time it will be forgotten. You need to see that what you're doing is not good.

He looks at her and sees the hope in her eyes. Hope that he will change and do as she says. But what she doesn't realize is that it is too late. He is beyond that point of return.

He shakes off her hand on his arm and looks at her differently. Not with love but with hatred. Hatred because she cannot understand him.

Because she loves someone else even when her only chance at surviving is right in front of her. Because he has taken care of her and she has only rejected him.

"No. I will not stop anything. You could've been with me and saved yourself and your child but you chose wrong and now you will pay." He whispers to her and walks backwards.

"Take the child and bring her to me." He commands one of the robots. It obeys and moves towards the woman.

"No. Victor, no." The woman backs away until her back hits the wall. She holds her child close to her chest while shaking her head.

"No please don't. She's my daughter, you cannot take her from me." She yells at him but all he does is stare at her as the robot snatches the child from her arms and brings the child to him.

"No." The woman screams. "Please Victor, don't hurt my child. Please, I beg of you. Please. Bring her back to me."

He ignores her pleading and goes away. The baby is awake now, crying as she doesn't recognize his face.

The last thing he hears as he walks down the corridor is the woman's screams.