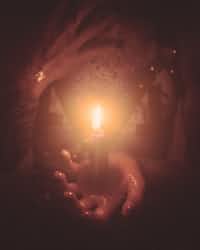 lotusleclair Have you ever tried to swallow a baby?
Autoplay OFF   •   13 days ago
Transcript Use Images
Welcome the the mind of Rose, a girl on the brink of her own destruction. I hope you enjoy.
thriller suicidementalhealthmental healthdemons

The trees rushed by in a blur of red and yellow as we passed by the entrance of the hospital I was kept in for weeks on end. I can hear myself breathing, but I don't feel any air enter my lungs.

My fleece sweater feels like pure warmth wrapped around me compared to the freezer they called a 'hospital', especially under the heat being forced upon me by the air conditioner.

The chill from outside barely nipped at my nose and fingertips.

I could feel the nightmares clawing at the back of my subconscious. I needed to distract myself, so I decided to stare out the window.

Admiring the orange trees passing by, I started to hear the screaming once more.

Upon having been released from the hospital, I was prompted to take some antipsychotics to help with the hallucinations.

With the drugs taking their sweet time to kick in, and the added benefit of my mother being silent the entire way home, my ride was decent. The music playing cut to static for a moment.

My mother thought nothing of it.

As soon as we arrived home, we both seemed to notice that the lights to the front door were on. Then we saw dad; he was holding two suitcases, one in each hand.

He glanced over at our van, seemingly in distress. Walking along the sidewalk towards us, he set down his suitcases and embraced me.

As his arms wrapped around me firmly, I felt like I was suffocating. "Go inside," my father said to me, his voice sounded harsher, colder, than I remembered.

I grabbed my things from the back seat of the van and went inside, nearly tripping over my own feet on the way to the door. As I shut the door behind me, I pressed my ear against the cold wood.

Despite how thin the door was, their distance was enough to keep me from being able to listen in to their conversation.

I decided to forget about it and lugged my things up to my room, dragging each foot as if there were weights strapped to them. Once I got to my room, it seemed to have been untouched.

I let out a longing sigh, dropping my bags at my feet and flopping onto the queen-sized bed that sat in the middle of the room.

As I settled into the natural crater from years of use and slowly slipped into oblivion, I heard the slightest stomping making its way up the stairs.

Around two a.m. the sounds of screaming ripped me from limbo. As soon as I opened my eyes, I felt absolute agony press itself under my skin and into my eye sockets.

My sight was gone, my eyes dropped to my cheeks and dangled by the nerves and blood vessels. Something was ripping my fingernails off, peeling them back like a sticker in a book.

As if they didn't belong there at all.

Just as I thought it couldn't get any worse, I heard the voice of my mother calling my name. She sounded upset.

I tore open my eyes, clawed at my arms and torso in a weak attempt to get the nightmares off of me. Once my vision cleared, I saw my mom sitting on the bed next to me.

She was crying, tears dripping down her hands.

I reached out to her, my hand caressing her trembling shoulder. She lifted her gaze to meet mine, then threw herself onto me like one of my friends would after a bad breakup.

I shook my head, resting my hand on her head to console her. "Who's gone, mom?" I asked, I haven't called her mom in years.

"Your father," she started to sob again. Then it hit me, my dad was gone? Why would he leave us now?

"I just got back, though," I said, sorrow filled my voice. I, too, started to cry for the first time in months.

The only reason I have to defend myself is my father, who never even tried to bond with either of us, leaving.

That night, my mother and I fell asleep in my bed; my arms wrapped around her loosely.

In the morning, I woke to that same cold that had enveloped me in the hospital. We had to go to the court of law a few days later. Mother forced me to wear my best dress and some light makeup.

"You look so beautiful, Rose," she said, a weak smile plastered onto her face.

While we were at court, they declared my mother not fit to care for me considering how awful her mental health was in the past 6 months.

I went home with her regardless, but only for a few hours. Just enough time for me to pack my things. The judge said I can still visit her, just not for longer than 4 hours.

I watched her wave from behind the window of the front door as my dad backed his truck out of the driveway. She watched us drive off, and I watched her fade into the background.

Once we were home, I went directly to my room. Sitting on my bed felt familiar, but not familiar enough to comfort me. I took out my pocket knife and began my relapse.

I could see them, the parasites that plagued me. I dug the blade into my wrist, pushing it further and further to get those damned things out.

They were clear as day to me, crawling under my flesh. They kept worming their way into my veins. One slip of my fingers could kill me. With blood dripping down my arm onto my lap, I passed out.

A few weeks later, when I went to visit my mother, she had a glass of some whiskey concoction sitting on the table next to her.

Every few minutes she would take a sip, and each time she finished the glass she would go to the kitchen to get more.

After the first few visits with her, my mother seemed to be getting worse. Her alcoholic nature only spiraled her into an even worse depression.

The only good thing I could perceive during a visit with her is that she lets me smoke. Dad hates that I started smoking, but what say should he have when he never cared before now?

The last time I was at my mother's apartment was last Monday, and now I've just heard from my father that she's dead. I overheard him on the phone with the police, he said it was an overdose.

I marched my way up the same stairs once more, filled with shame. Once I got up to my room, I locked the door and took out my bloodstained pocket knife.

I could still see the little remnants of one of the parasites that I had carved out roughly a month ago.

The voices kept screaming, clawing at the insides of my head to try and get me to kill myself. I hear them banging against my skull.

I claw at my wrists, the cuts opening once more. I dug at the exposed flesh, crying out as I ripped into it with my nails.

The blood dripped from my wrist slowly as I continued to scavenge in my arm. My veins were finally visible, and their only hope for getting me to stop is if I were to pass out from the bloodloss.

I took my knife and poked the vein, prodding it with the edge of the steel blade as a kid would to a bug.

My apparent sobs turned into wails as I slid the knife under the vein, jerking it upward with a final sigh. The blood spurted onto my face before vomiting its essence onto the bed sheets.

I laid back on the bed, my head propped up on a pillow.

I reach over with my scar-free arm, grabbing a hold of my favorite stuffed animal from when I was a kid. Finally, I close my eyes and everything drifts away.

I see my childhood, my mother and father teaching me to ride a bike.

Then it flashes back to day I lost my first tooth, then to when I was in a spelling bee in the third grade, then to me sitting in algebra two in the ninth grade,

then to that day I watched my friend get hit by a car, then finally to my last moments in the hospital just a month ago.

I saw it all, but at the same time I saw nothing. Nothing was substantial, nothing mattered. My life was dull, fatuous even.

And with that last dying thought, I was brought back. The pain I felt was unbearable, but it soon subsided. I saw myself standing in front of me, their back turned to face me.

They seem to be focused on something else. I reached out to tap their shoulder, but as soon as my hand made contact with them, they vanished.

I looked around, hoping to find an answer as to where I was.

I heard a soft voice behind me, "You finally arrived, Rose," it said. I turned to face whoever was speaking, but nobody was there. Then I heard soft laughter, this voice was laughing at me.

"Foolish child, you are mine now," it said softly. I felt its breath brush against my ear. I shivered, the thought of some being talking to me sent chills down my spine.

I felt a hand resting against my shoulder, I turned to look at the hand and the pain came back. I felt liquid dripping from my eyes as my vision was covered by some sort of black film.

I felt all control being ripped from my grasp. Then, in a matter of a few seconds, I was gone.

They began zipping up the body bag to haul it away, but as they did the father pleaded with them to allow him one final moment with his daughter.

They walked out of her room, keeping the door propped open behind them. The father looked down at his daughter and smiled, caressing her cheek.

Just as he was standing up, Rose's pale lips curled into a smile. Black eyes looked back at the father, beckoning him to join her.