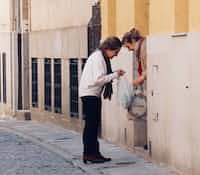 2 Years ago, I used to live in a little neighborhood with not many people. I loved how peaceful it was there, Though the neighbors always seemed weird.

One day, I was cooking, And I was out of butter, It was really hot and my husband had took the car and left for work.

I decided to ask the neighbors for some butter, Maybe I could get to know them better. I walked to their front door and rand the bell. I heard faint yelling and it stopped as I rang the bell.

A girl about my age answered the door. She was sobbing slightly and quickly turned up a slight smile.

I told her I needed some butter and she gave me half a block in a plastic box, I said thanks and returned back, I knew something really bad was up.

For the next few days, I used to hear banging and yells from their room. I finally had enough anger and confidence to face them. I went to their door and rang the bell.

A man, Around his 20s Answered, He looked traumatized and scared, I asked what was wrong and he just declined that he was ok and shut the door.

As he did I saw some red stuff on his hand, Then to my horror I heard a gunshot and I knocked over the door to open it. I was frozen from what I saw.

The man who had answered the door just now was standing in rage, holding a gun, There was a kid who had a fresh bullet would and the girl who gave me butter,

laying on the floor with a fresh knife would. He turned around to escape and saw me. He point the gun at me and somehow, I managed to close the door and the bullet missed.

He shouted from the other side of the door. But I called the cops and they quickly arrived, He got arrested later and as my husband came back, I told him everything.

We them moved out to where we are now and about a month ago, News popped up on the TV that a man had escaped from jail and had murdered many people, As soon as the picture rolled, My heart sank,