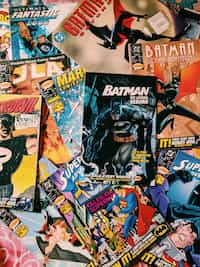 The rest of the team was already there. Spider-girl is hanging from the ceiling on a web. Everyone was tense. "I have a new assignment for you all.

I want all of you to spend more time together, and grow as a team. Until then, you aren't ready for battle." He says. "I am not getting to know a killer." Spider-girl huffs.

Black Cheetah tenses again. "Excuse me?" Fury demands. "The cat is an assassin, trained to kill. You put everyone here in danger by putting her in a room with her." She snaps.

Black Cheetah looks at Alec, unsure. "Wait, so you have a criminal on the team?" Patriot demands of Fury. "I know that she is dangerous, but none of you saw what I saw.

I gave her the chance to change. It's what I do." Fury shrugs. Alec wanted to comment on Natasha Romanoff or even Clint Barton but didn't know how the group would react. "I am not just a killer.

But none of you would know that. Instead of asking questions, you dig up my file. Yes, I am an assassin. Yes, I kill people. But you don't know me. Just what I've done.

" Black Cheetah snaps, turning to leave. The rest of the day, Black Cheetah avoided everyone. She even snapped on Patriot when he got too close.

Alec had watched her from afar, not wanting to make her angrier than she already was. Morgan approached her. "Hey." She said softly. Black Cheetah just glared at her. "Look, I know Fury.

I have my whole life. If he trusts you, so do I. And besides. He's worked with people who were once the enemy before. Natasha, Clint, Bucky, Wanda, Vision, even Loki." She said to her.

"I knew some of the original Avengers. Fought them, stood against them. I am a monster. Nothing like those people." She said softly. "If you're a monster, then I am too.

I can't even begin to explain how these... golden menaces... have changed my life.

It's one of the reasons I'm not running around here using them to make illusions or play pranks on other people. Even training I'm uncomfortable with." Alec commented.

She wouldn't meet his eyes. "You have no idea what I can do. How much damage I've caused. Thanos would have looked like a child next to my destruction." Black Cheetah said.

"But he had an entire day of annihilation. You had a spread of who knows how long, right?" Alec said. She scoffed. "That was without my powers.

With them, I could destroy this whole solar system in 2 minutes." She snapped. And inexplicably, she broke down and ran off. Morgan looked helpless. "I hope she's alright," Morgan tells Alec.

"Oh- uh- thanks Morgan," Alec said, taking the box. He sounded unsure and unhappy with this. "You know, I bet she's got more to her than we can see," Morgan whispers to Alec.

He looked at her, a bit annoyed. "If the box is a distraction so you can change my view on Kitty, I'll leave right now," Alec said. "You misunderstand. We have the same view.

She's hurt, broken. There is a reason Fury trusts her. I trust him. He was there for me when my father died. I think she's afraid of what she can do. I've seen it before." Morgan explained.

Alec looked at the box, then in the direction that Black Cheetah went. "I have too..." He said quietly.