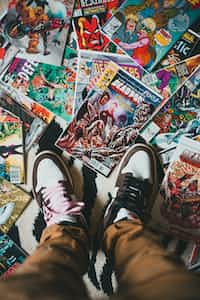 In the week that Black Cheetah had left, the team fell into disarray. May and Patriot were completely ignored, and Loki and Thor had gotten into a huge fight on Asgard.

This caused Thor to become very grumpy. Alec had stayed in his room the whole time, only coming out for food. Suddenly, there was a knock on Alec's door. "Who is it..?" he asked, tiredly.

I need to talk to you. You seem to listen." Loki says urgently. Alec sat up a bit. "Can you come out?" Loki asks. Alec sighed then walked out of his room.

His hair was a bit messy and he had a black face mask on, which covered his mouth and nose."M'riel and some ex-SHIELD guy have her.

Her plan was a classic catch and release, but that's not what happened. They will kill her." He says. "Fury won't believe me. He says she can take care of herself, that this is impossible.

" He adds with a sigh. Loki seems sad. Alec gave a quick sigh. "So you went to me since I'm the only one who seems to care about you and Kitty, right?" He said, clearly tired. "Honestly, no.

I could have gone to Starks kid or the arrow girl, but you, you listen to me. I know you don't trust me, but you at least let me talk." Loki explains. "I messed up. I told May about her.

I thought it would be entertaining, but it blew up." He adds. Loki ran a hand through his hair. He had changed. Now he's wearier and looked tired. Loki begins to walk away, but he turns to Alec.

"I can understand if you choose to stay, but I am going to try and help her." He says, sadly. Alec closed his eyes, trying to think.

"If you bring me to the right place where Kitty was last seen, I'll trust you." He said after a while. He nods eagerly and shows Alec an illusion.

"Obviously, we're still in the compound, but this is what I saw." He says. They see her being taken in a plane by two men, her sister unconscious before them. "You spoiled brat!" One laughs.

They drug her and take her into the plane, and it flies away. "I stayed behind to help Sokkqoa," Loki explains. The illusion ends, making Alec look back at Loki.

"I should be able to get us there by helicopter." He commented. Loki nodded. They started to walk towards where the vehicles were kept. Alec picked one and the duo boarded the helicopter.

Loki stayed in the back as Alec flies. "Why do you like her so much?" Loki asked. "It's not that I don't like her. I just don't want fights to happen around me.

So, I tried to make peace with the team. You can see how that played out." Alec said through the helicopter headphones. "Yeah, sorry about that," Loki says, guiltily. "It's alright.

You didn't know it would happen." Alec replied. "The thing is, I kinda did, I just, I didn't want to believe it. I don't know how to explain it." Loki says, confused.

"It's like you want to see if what you saw could change, right?" Alec responded. "No, more so that the memory, or idea, wasn't mine," Loki says. "I don't know. This is the place.

" he blurts when they reach a patch of woods. There was an unnatural mist, and it was chilly. Loki looked nervous. He pointed to an area of fog. "There aren't any trees there.

It's an open patch." He informs Alec. There's a whistling sound, and a blade dives through the windshield.

Alec looked at the blade, alarmed, as Loki caught it just before it would have plunged into Alec's throat, and threw it back at the attacker.

A man in old war armor emerges as if floating in the mist. Loki prepares to attack. "Get me as close as possible." He says to Alec, making him nod quickly.

Loki goes to the hatch on the side, a blade conjured in his hand. The man sends a dark swirling mass at the helicopter, and it hits Loki.

Loki is pushed back into the helicopter, as it begins to spin out of control. Loki passes out as Alec tried desperately to maneuver the craft and keep it airborne.

There was a burst of energy, flashing in rays of liquid gold. The man disappeared, and the helicopter crashed near a lake. Alec's head banged into the steering wheel, making him blackout.

Sometime later, Loki wakes up and sees Alec. He tries to move to Alec, to help, when he realizes the steel twisted around his arm and shoulder. He was stuck. "Alec! Alec, wake up!" Loki called.

Alec's eyelids fluttered slightly but didn't open. Blood was oozing down his face from the impact. Loki groaned in frustration. He tried in vain to get out of the mess of bent steel.

The vague smell of gas alarmed him. He realized the helicopter was about to blow. "Alec! You need to get out of here!" He yelled. Alec slowly woke up a bit.

His head was still sore and all he could hear was a sound of a high-pitch ring.

Seconds before the helicopter blew up, Alec created an illusion outside of the vehicle then destroyed the versions inside the helicopter, making it seem like they had teleported out.

Alec nodded, trying to catch his breath. The stunt he pulled off made him use most of the remaining strength he had after the crash. Loki looked around. "I think we should go north.

" He says, pointing south. Alec sighed. "Even I know that's south, Loki..." Loki looks in the direction he was pointing in. "So it is. What do you suggest then?" He asks.

Alec sighed, holding his head. "I don't know, Mr. Loki..." There was rustling in the bushes. Loki quickly conjured his blade. A rabbit jumped out. Loki was staring in disbelief.

"And I thought we were about to be attacked." He said softly. Alec gave out a little laugh which was followed by a couple of coughs. Loki turned to Alec.

As he did so, the rabbit morphed into a beautiful girl in clothes fit for a jungle and ran into the woods. Loki turned just in time to see her departing. "Did you see that?" He asks Alec.

Alec hesitated. "My heart says yes but my mind is still confused..." He said after a couple of seconds. Loki just stares at where she disappeared.

"Is it wrong I kinda want to follow her?" He asks. "After what just happened, definitely...." Alec said. Loki nodded. A shower of arrows cascaded down on them.

Loki used his magic to guide them away. "We should go." He tells Alec, in an urgent tone. Alec looked at him, then nodded. "I'll follow you as best I can." He replied.

Loki nodded, and led the way through the woods, turning every now and then to check on Alec. A grey structure was seen in the distance, small and compact.

Alec didn't see the figure, as he was too focused on following Loki and not passing out again. A man in dark Blue came out. He looked around. Loki froze. Alec looked at Loki, confused.

"That is M'riel." He whispers. "Shit..." Alec mumbled. A boy comes out. He looks to be a teenager. "Pahtero, we are ready for extraction." He says. Loki looks confused.

Alec went closer to Loki to get a better look. "I don't recognize the boy." He whispers. They both go inside, and Loki approaches carefully. Alec followed as well. A frog croaked at Loki.

"What, are you going to turn into some strange girl too?" He asked. The frog blinked and ate a fly. He shuddered. Alec sighed, then continued to follow M'riel and his assumed sidekick.

Loki followed, catching up quickly. There were flashing lights and a blood-curdling scream, which Alec recognized as Black Cheetah's. This made Alec pick up the pace and follow the sounds.

As they drew nearer, M'riel let out a triumphant laugh. "Oh my sweet girl, you are a fool." He says, giddily.

Alec had reached the room and heard this line, making him terrified of what M'reil had done. Alec and Loki see her slung into a cage. Alec froze at the sight. His eyes flickered gold.

Alec didn't respond, now looking at the floor. Cadence sneered. "Cat got your tongue?" He says. Alec's eyes turned golden, but he showed no movement. Loki however, smiled.

He conjured a blade, and in one swift movement, sent it sailing towards Cadence. The boy caught it and sent it back. Loki wasn't fast enough, and it caught him in the side.

He ripped it out and glared at the boy. Alec glanced at Black Cheetah again. She was out cold. M'riel followed Alec's gaze. "You need to stay away from my daughter.

" He warned, brandishing an otherworldly device. Loki gasped, his eyes widened in horror. "You will do no such thing." He snaps. "My daughter got to play with one. It was a brilliant show.

" M'riel smiled. "This is my son, Cabra. He at least hasn't shamed the family." He sneered.