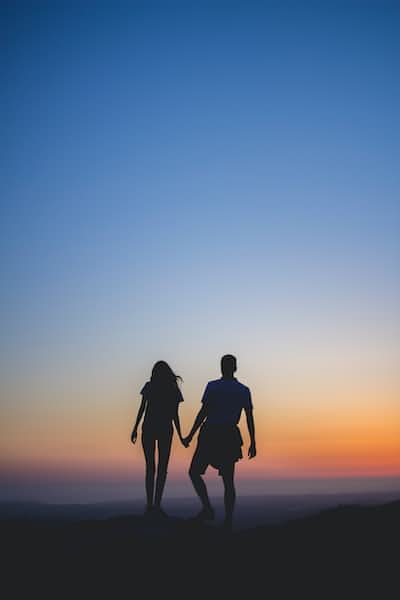 It started the day of winter formal. Seline really wanted to go. She waited for Asher to ask her out, but she knew he wouldn't. He thought dances were a waste of time.

Seline couldn't imagine going without Asher. Everything would feel so lonely. So she didn't go. Instead, she just dreamed of what could've happened if they went.

They cycled to the neighborhood park, looking out at the twinkling lights of the city by the cherry blossom trees. It was tranquil, and insanely beautiful.

"It's so beautiful here," Seline said.

And so are you, Asher wanted to add. But he was scared. He couldn't let his feelings destroy their friendship. Without her, he was like a floating piece of paper; alone, brittle and meaningless.

"You're beautiful," Asher blurted out.

Seline looked at him in suprise. Sparklers seemed to burn inside of her, and as they looked at each other's faces, it felt like they were looking at each other for the first time.

Asher leaned in, and as they shared their first kiss, the sparklers in her stomach turned to fireworks. They burned, and slowly consumed her sanity. No one had ever made her feel that way.

Something changed between them in that moment. Soon they were cycling back to his house, and in his room, all the boundaries ever set between them shattered. It was magical, and visceral.

They had never done anything so reckless before. It was a new, overwhelming feeling. Seline felt like she was falling in love. She believed that the next day, maybe Asher would ask her out.

Asher was scared. So he did the worst thing he could've done - he hooked up with another girl. Seline could tell what was happening next door from her window. And it shattered her.

Seline was a dead leaf on the ground, and with every step he made, she broke a little more.

Seline and Asher didn't speak. She couldn't face him, and neither could he. Looking at his reflection in the mirror, he wanted to drown himself. "What have I done?"

Seline found her solace in the sky. The clouds would float by in different shapes, and she would float with them, to destinations she had no idea about. But unlike the clouds, she was alone.

At night, when it wasn't snowing, she lay down on the cold grass of her backyard. She would shiver, and watch as her breaths turned to white smoke under the stars.

She had no idea that Asher was watching, and seeing her teardrops turn to frost on her cheeks sent cold blades straight to his heart. His head would hurt, and he would curse and regret it all.

He had made a mistake. He couldn't do this to Seline. He was flawed, and she could find someone much, much better.

Asher couldn't resist the urge to look out of his window, though he knew it was stupid. There was no way Seline would be out in this cold weather. But she was.

Asher found himself in her backyard few minutes later. He didn't care about the fact that they didn't talk. That she possibly hated him. He just wrapped his arms around her.

He talked, he told her everything he ever wanted to. He told her all his reasons, but he knew there was one thing yet to be said. He was scared, because it had the power to change everything.

"It stands for Arteriovenous Malformation. It's this horrible defect in the blood vessels in my brain. I might just have a stroke one day and... die. With AVM, you never know...."

As he poured his heart out to her, he felt all chances of being with her slipping away. Her face paled and she turned away, leaving him with his porcelain heart, broken.

The sky was dark that day. No star was shining. Seline felt like someone had robbed all the lights out of her world.

She closed her eyes, trying to stop the tears from falling. When she opened them, she could see a lone star, shining meekly in the navy blanket.

"See that star over there?" she said, pointing at it.

They watched in awe as the stars appeared, one by one, slowly lighting up the sky until it seemed absurd to even think that they weren't there a few minutes before.

"I don't care if you're sick, Asher. I'll still be with you. If you feel like the world is dark, I'll be your star so that you don't close your eyes. It's never completely dark, Asher."

Asher felt tears prick his eyes. It would be embarrassing to cry, but she already knew him well enough not to judge anyway. She was his best friend.

"I love you too," he confessed.

This time they lay on the grass together, shivering in cold and a giddy happiness, surrounded by a magical, iridescent silence.