Commaful
Dream in a Dream 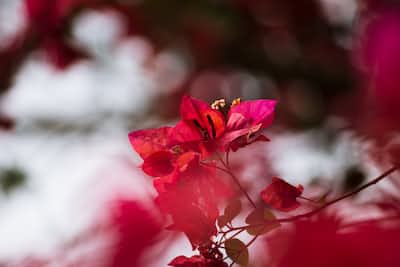 Dream in a Dream

a dream in a dream.

the soft colour swirls around and above him, reflecting in his irises, the white of his clothes.

he holds a hand to the sky, lengthy eyelashes fanning across blushed cheekbones as his eyes shutter to a close.

a rough streak of rouge, deep and earthy, chases the prominent veins mapping the expanse of the back of his hand.

the livid red seems to burn as it snakes up his clothed arm, staining the starchy cloth until it glows a pure pink against the navy backdrop.

the colour is rash and bold, ragged around the edges.

it does not quite mix with the ones that came before or after it, and instead creates a conglomeration of the most startlingly brilliant hues.

his eyes blaze with such realization. he settles onto the churning mass on the ground, head still trained to the sky.

canary yellow weaves through the coarse blackness of his hair, meeting blue halfway through.

he runs a hand above his scalp, skirting through rich thickness until it coats his slim fingers. that particular shade is especially bright, the royal cerulean of the sky.

his splattered palms fall to the spaces beside him. his fingers curl into themselves, the undersides of his nails tainted with a resonant light.

oh, how marvellous must this sensation be, for he is surely drowning in the redgreenyellowpurpleblue that encompasses him.