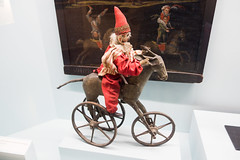 I am told our generation has much to fear. And I agree.

(Escalating racial tensions, rising tuition rates, and a snappy president-elect who vows to keep the press in check just to name a few)

But I've noticed something,

Hidden in the articles about millennials being mooching freeloaders.

Us millennials, we're going to fail.

And when we do, us millennials, we'll be disappointed.

Over and over, the word is repeated like it's the worst thing in the universe.

(A universe with Jar Jar Binks, I'll have you know)

And that's true. But isn't it funny?

The way we throw around that word.

The way we fear it.

And it doesn't make sense.

You see, clowns are terrifying.

They probably have axes and they'll probably kill you.

But disappointment won't. It can't.

You've been disappointed before.

Sure, it stung, but that's what chocolate and hugs are for.

You got up and kept going. You kept trying.

And that's what matters.

So let's not fear disappointment.

Because that's a healthy fear.