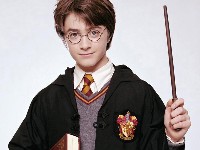 harrypotter Parody, not officially affliliated
Autoplay OFF   •   4 years ago
Transcript
My name is Harry Potter and I'm kind of an asshole. Deal with it.
funny fanfictiongayfanficgeniusharry potter funniest genius stories

My name is Harry Potter. And this is my story. Well....part of it.

Up until I was 10, I lived with my aunt, uncle and cousin. Worst fucking people ever. And I'm not just saying that cuz they're family.

I mean this is is what Dudley, my cousin looks like. I mean seriously. He's not the least bit fuckable. And again, I'm not saying that just cuz he's family.

A few days before my birthday, owls started bringing me letters. Mind you, this is before I was crazy famous. I NEVER got mail. Not even my secret boyfriend would send me anything.

Ok fine, fuck you. I didn't have a boyfriend. I was a lonely kid? Okay? Happy?

Anyway....my stupid fat uncle decided that the best way to get away from the mail was to go to an isolated island in the middle of a thunderstorm.

And that's where I met Hagrid. A small giant. Think the Big Friendly Giant. But harrier. <- get the pun? I know, I'm hilarious

The dude comes out of nowhere and gives Dudley, my dumb cousin, a pig tail. It's epic. And honestly turned me on a little. Not gonna lie....might've married Hagrid right there.

Can't imagine what the sex with Hagrid would have been like tho. He's huge. Like everywhere. Anyway, it was my birthday and I just turned 11.

He sorta kidnapped me and told me I had magical powers and that I was a rich mothafucka with more gold than all the leprechauns combined.

And then he put me on a train and sent me to magic school. Honestly, I think clown school would have been more fun. But whateves.

(I later found out that they do)

Also met this nerd named Hermione. She was pretty cool but she was totally mackin on the red head and that made me jealous.

We get to magic school and meet the man himself. Harry Houdini. Apparently he's the headmaster.

Jk jk. <--also the name of the author of my book. Actually this old dude who's age is OVER 9000 is the headmaster of the school.

Pretty sure he thinks I'm cute. But I don't date anybody over 100

I think that's enough storytime for now.....but if you wanna find out about a rapist with no nose and my crazy adventures with Snape (wink wink) share the story and maybe I'll write a part 2.

Till next time mothafucka