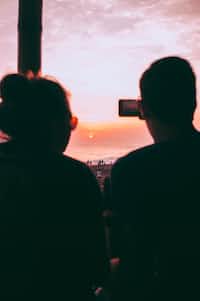 haliebell Find what (or who) makes you happy <3
Autoplay OFF   •   3 months ago
Transcript Use Images
If you are easily grossed-out, don't read this!

(Hope y'all are having great days and nights)
fiction grossshort

It is Lauren's third date with Matthew. She is at his house, and he is cooking for her! She thinks he is the perfect man, or almost. He is polite, handsome, and he makes plenty of money- though she isn't a gold digger. The flaw is his horrid breath. She hopes whatever he is cooking doesn't make her breath smell like his!

His voice comes from the kitchen, "The food will be ready any minute now." "Okay," she says. A few minutes pass then he is putting her plate in front of her, and he sits across from her with his plate.

Then he sits staring at her, expectantly. "What?" She smiles at him. "Try it!" He says enthused. "Okay," she smiles again,"well it looks delicious."

She picks up her knife and fork and takes a bite of the meat in front of her. It was horrid, awful, the worst thing she had ever tasted! "How is it?" He asked, eyebrows raised. "Great..." She tried to look like she enjoyed it.

He smiled at her, pleased. He then poured them wine, he knocked over his glass, spilling it all over his pants. "Oh no," he said, "pardon me, I have to go clean up." "Yes, go," she said, pardoning him.

He left the room. Lauren stared at her plate of food. She decided that she was going to get some water out of the kitchen to wash the taste out of her mouth, the wine would just make it worse.

She got a glass from one of his cabinets. She opened the freezer for some ice. She screamed and fainted. There was a torso in the freezer. Enough missing out of the body to make a dinner for two...

... Molly was so excited to be on her fifth date with Matthew. He was going to be cooking for her...