Commaful
The Future of the Wizarding World Part 1 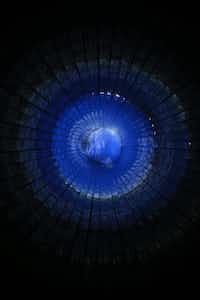 gummyfries Community member
Autoplay OFF   •   4 months ago
Transcript Use Images
Imagine the world of Harry Potter from 200 years into the future. What happens when muggle technology becomes powerful enough to catch up to magic?
harry potterharry potter futuresciencefictionscience fictionwizarding worldjkrowlingj.k. rowlingmagicharry potter technologytechnology

The Future of the Wizarding World Part 1

The muggle world had transformed quite a lot over the past few hundred years from the time of Harry, Ron, and Hermione.

A certain author once said that advanced enough technology would eventually be indistinguishable from magic, and that certainly seemed to be the status of Great Britain today.

A holographic tablet skimmed at shoulder height across the research laboratory.

It cleared the expanse of a scarred wood floor, passed through the projected model of a plutonium molecule which blinked obtusely,

It twitched, faltered, and dropped, spilling freshly prepared Darjeeling, alongside a serving of creme, honey, a bit of sugar, all of which clattered to the ground.

"Andrews!" The professor had been punching away at his computer, fixed to his holo-screens. His tea set spilling over hadn't broken his focus at all.

"Andrews! The levitation belts are off again!" He was working on what could very well be the most groundbreaking discovery in all of particle physics.

Data poured onto the left portion of his view while the screen at the right rotated map information from northern Britain. He sat at his desk, zooming in and out.

The professor flicked a gesture to send the computer to a different time period and vast stone towers phased into view -- and disappeared, replaced with landscape as if they were never there.

Professor Alderberry did not move his head from his screen for a moment but yelled with such a rumble that his mouth seemed to tilt towards the door. "Andrews!"

"Professor!" Technician Andrews presently bungled into the lab, taking momentary note of the spilled tea and broken lab tablet. "The levitator programming has been off after the last update.

I'm working on it right--as--we--speak." Andrews made a point of slowing the last few words as he righted himself in the room to indicate a bit of focus and determination.

The professor remained fixed to the terminal screens.

He waved hand motions to summon recorded times, dates, and magnitudes of zoom as he toyed with his map view until that blasted gleaming castle was barely visible again.

It was bright, elaborate, with a great number of turrets ascending with ill-regard for logic or symmetry. Then gone as before.

"Andrews, what do you suppose the odds are that a vast fortress exists in the cliffs of Scotland, the size of a small town that no one knows about and that no one has ever seen?"

"Well I'd wager if something like that was built, that someone probably saw it when it was going up!

" But that kind of easy logical catch wasn't about to unfurl someone with as powerful an intellect as Melvin Alderberry.

So few in the scientific community in London hold advanced degrees in both neuropsychiatry and particle physics, let alone multiple publishings in all of the European journals.

The important ones, anyway.

Failing to win attention to his glib comment, Andrews resumed repair of the laboratory's levitation system.

While all modern homes are equipped with some form of telekinetic technology to keep people lounging on their sofas without having to move about (UrbanGlow punchily trademarked,

You never have to nip off to the fridge for a pint again!), the professor's lab in London retained quite an old model levitator from back in the 2160s. Andrews had to use an adapter to tap in.

He winced, tensed his brow, and a light in his temple flickered orange.

He brought up the levitation node display directly at his cornea,

and within his view a visual wiring map projected as strands across the room appeared in the same hue of orange as was now visible within his eyes. He went to work.

The professor motioned vaguely to the spilled tea, milk, honey, and sugar seeping into the floor's wooden planks.

"Can we get this cleaned up after you've finished messing about with the system?"

Alderberry continued to scan for the castle. He was again vexed by that blasted, plain grassy cliff side.

Why wouldn't the computer get a fix? He set the date back one month, then two months ago. Changing display to ultraviolet, infrared. Where was it? He had just had it, after all.

He called up his previous search index that the computer had logged for him and brought up the date that heralded his discovery.

There it was, that vast yet hazy stone castle complex that seemed to appear out of nowhere six weeks, one day, and ten hours ago.

Starting there again, the professor went down to eye level on the castle, taking up a view from one meter off the ground.

He let a few milliseconds pass on the terminal and the fortress phased out of existence again. The bloody castle was like an ethereal structure, barely (incapable of?) staying in focus.

He scrolled through the time markers. Millisecond by millisecond. Finally the castle materialized as stably as he had ever seen it, though still halfway visible. Towers, courtyards, gardens.

The professor scanned to the left, to the right, at several meters at a time. Children playing? They were barely discernible. Like ghosts with cloaks and little neckties.

A few more meters to the left and then he saw it. The clearest image yet, an ancient wooden sign plain as day:

The image faded away.