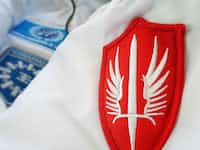 gumgumdookuin Community member
Autoplay OFF   •   5 months ago
Transcript
Bent on a great war known merely as the Outer War, a untied arm force of aliens named The Viren Ring have wished of mankind's help in stopping The Division, a technologically, democratic lead empire who have chosen to expand beyond their reach pass The Alpha Venari system with no clear truce for cease fire. Theater by theater, system by system they continue to consume nations they claim to be theirs's once 50 years ago and will not stop coming, and they will not stop killing.

With no real option on the table, humanity shall form The Galactic Coalition under its banter and be a defender beyond The Red Line of Umbra. Galactic Marines named James Karloff, Jake Jablonsky, Samantha Jules, Akasha Fenik, and Sophia Coleman shall take charge in rescuing, and protecting Eiran Gentu, a Viridan XEA operative who may will reveal the covert coordinates for a possible skip space rupture, leaving many exposed to The Division's imperial efforts. But if there's one thing they all take comfort in is this war's just begun.