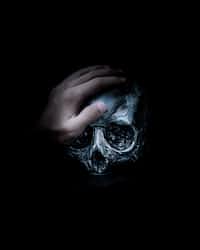 goldenphoenix Death doesn't discriminate
Autoplay OFF   •   3 months ago
Transcript Use Images
This is my entry for @malcom_pace's contest! I chose the prompt Death
deathcontest@malcolm_pace

I met a friend today

His name was Death

I asked him what he did for a living

Staring blankly at me, batting his eyelashes

He did the opposite of giving

What did that mean?

But the closer I got to Death

The better I understood his scheme

In his sharp black suit, he won me over

I felt an irresistible draw

Like to a diamond in the rough, or a four leaf clover

He convinced me of the beauty in the night

That when the moon was hidden from view

There was nothing better than the lack of light

He led me from my lust for life

Sang to me in my sleep

Whispered sweet nothings and handed me the knife

I tried to pull away from my newly found friend

But his chokehold was so tight

On him, I started to depend

On him, I started to depend The world could see me deteriorate into nothing

He held me harder and closer

He held me harder and closer With shortness of breath, I stood huffing and puffing

Enclosed in the lackluster of our friendship I became numb

The emotions drifted with my vitality

The more time you spend with a person

I suppose I couldn't see the situation worsen

Collar around my neck he leashed me like a dog

I cared so deeply for him

Eventually I succame to this fate

Despite his control Death, I could not hate

I loved him too dearly to notice the signs

His presence was odious and it wasn't benign