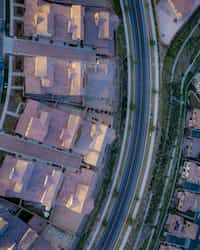 Do you ever look out at one of those suburban neighborhoods where every house looks exactly the same, like a sea of bland lives set in rows?

They always felt so dead and empty, like no one actually wanted to be there. I don't think they did.

It was around 8 pm when I left my house that night.

My best friend's girlfriend had just broken up with her so I was on my way to try and be some sort of emotional support. Lucky for me she lived in the middle of one of those dead neighborhoods.

As I drove into the neighborhood the darkness seemed to engulf me.

That's when I realized a strange fear had overcome me, not one of being scared but one of judgment like I was seen as less or grotesque.

The houses seemed to loom over me, a reminder of my status. The streets seemed to go on forever. I looked down at my phone to check the street names, I've never been great with directions.

That's when my phone shut down. At first, I thought it had just been an automatic update, but when I tried to turn it back on the screen simply remained black. "Great, just great."

I sighed out loud. I'm pretty sure she lives in Magnolia. I guess I'll just have to make my best guess and go for it.

Driving further down the street I started to take note of how quiet everything was.

Sure it's dark outside but it's still only around 8 pm on a Friday; shouldn't people be out, maybe some parties or something, just anything at all.

I tried to disregard my thoughts and just focus on trying to find my destination.

The road ahead seemed to go on forever, I recall turning a few times but I'm still not sure of what direction I was even going in.

My car stalled. Now I've had cars break down before, but this, this. My car just shut off, just like my phone.

For a second I sat there and just took it in, the darkness, the feeling of failure, the frustration of everything falling apart, the guilt of not being there for a friend in need, and judgment for a crime I do not know.

I looked out at the street-sign my car had stopped next to. "Daisy Lane" That's close to Magnolia, I think.

I let my legs carry me out of the metal vehicle, starting my way down the pavement. It was cold outside, colder than it should've been.

I felt so small, everything seemed to be crashing inwards onto me. I stopped after about five minutes looking around for another street sign.

I looked up to see one about three feet away that read "Daisy Lane." in that same scrolled text. No, no, no this can't be right.

Running forward I saw my car, I jumped inside and tried to start it. Still nothing. There is no way this is happening. I know I took at least three turns in different directions.

I have to find someone, anyone. I jumped back out of my car and scrambled up and knocked on the door. Nothing. I knocked louder, still nothing, I rang the doorbell. No response.

That's when I tried the doorknob and heard a click. The door was unlocked.

I cautiously stepped inside calling out that my car had broken down and that their door was unlocked and I meant no harm.

It was quite beside my footsteps on the hardwood floor making slight clicking sounds. "Hello?" I called out, then once more a bit louder.

The kitchen was fully stocked and decorated but yet there was somehow no sign of anyone actually being there. I could feel my heart speed up, my situation set in.

Running up the stairs now shouting if anyone was home, what if someone had broken in before I got here. No. All the rooms were empty, every single one. All with signs of life but nothing living.

"Did I just break into someone's house while they were on vacation?"

Trying to cross this thought out of my mind I walked out feeling dazed and stumbled to the next house over and knocked on the door calling out that my car broke down.

I ran inside checking everything calling out, I could explain to the owners later but this is getting very concerning. No one home, yet again signs of life but no one actually living there.

" thing isn't real this can't be happening. This isn't real no no no no." I ran out of the house and crossed the street repeating this process but more panicked. Nothing. Next house, nothing.

This can't be right, I swear nothing was developed around here or anything like that. "Calm down there has to be a reason for this.

Maybe they're doing on night construction or maybe a movie is being shot here, but still where would all their stuff be.

It's fine, I'm fine, there's still one house left I haven't checked, maybe there like a stage manager or something there, ya that has to be right it just has to.

I carefully walked up to the last house, no even bothering to knock. I grabbed the door handle and turned it, giving its the signature click.

It was all the same, that was until I saw an extra door at the end of the hallway.

"Finally" I hurriedly walked over to the door, excited for maybe some clue at what's going on or maybe even some help. I opened the door, peeking into what would be my last chance.

The room was completely empty and almost in shambles, it kinda looked like someone's attic. That's when I noticed what was in the middle of the room.

It was a golden necklace with a compass at the end of it. I cautiously walked towards it picking it up. It was cold, feeling like it had been sitting outside.

For some reason I got the sense it was waiting for me? I don't know how long I stood there, just staring at the necklace, entranced by its shimmer.

I snapped out of my haze when I saw a light flash on from outside, then almost like a planned harmony my phone started buzzing, it was my friend, I picked up.

"Where are you, you're not usually late, are you okay?"

"Like ten minutes, I just wanted to make sure."

"Okay, I'll be right there," I said as I started walking out of the house, shoving the locket into my pocket. Running into the cold night air I look around.

I-it felt as if the buildings were screaming at me? Nevertheless, I got into my now somehow restored car, I decided after everything to just not question it.

I looked down at my phone about to pull up my GPS when I realized it was already on.

And that's it, I made it over to her house we hung out, watched some bad sci-fi movies.

Do you still have the locket?

Um actually yes, I don't know why but I don't think I could get rid of it even if I wanted to.

Then yes that will suffice. Keep it.

Okay, I guess I will?