Commaful
HARAMBE for you I weep 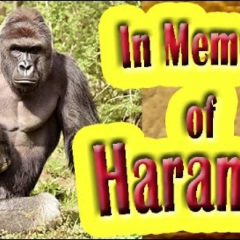 HARAMBE for you I weep

(CNN)Harambe was beautiful, gentle and a bit of a tease. That's according to one former caretaker. But the animal's placid demeanor makes it easy to forget that gorillas are huge, powerful

A 400-pound gorilla was shot dead by an emergency response team at the Cincinnati Zoo on Saturday after he grabbed a 3-year-old boy who had fallen into zoo’s Gorilla World enclosure.

Harambe, a 17-year-old silverback gorilla who celebrated his 17th birthday on May 27, dragged the young boy through a moat inside the enclosure. Zoo officials said in a press release

The boy had climbed over a barrier and then fell into the moat. The boy’s mother has been identified as Michelle Gregg. She said in a Facebook post on Sunday that “accidents happen”

Through no,fault of his HARAMBE was jailed, some say he was assassinated and murdered. It seems to me it was for expedience. Other zookeeper's said they would have done the same.

Our shake and bake culture

Expedience seems a poor epitat for a majestic 17 YEAR OLD gorilla. It would be a salve on my wounds if his mother had more to say than "ACCIDENTS happen"

Though I never met you

I weep for you, I cry for us, our species. I am an elephant, (My animal identity ) we were comparedres. We walked alone, but we were family oriented..

YOU WERE MAJESTIC, BEAUTIFUL

All GOD'S CHILDREN, you were untainted, unspoiled, you were imprisoned, whether assisinated or murdered that's for the beholder, my life, our lives are a little less good, a little less innate.,