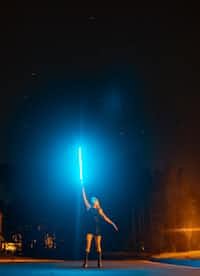 flameo لماذا أنت هنا؟ مساحة شخصية...
Autoplay OFF   •   3 months ago
Transcript Use Images
Long ago, in the days of the Old Republic, there was a young boy. A Jedi youngling. A boy unbeknownst to the lies he was told. Until now...
fanfiction star warsepiclike it pls

Disclaimer: Star Wars is not mine.

Weido groaned. "I'm trying to sleep, dude." He rolled around.

"It felt like a cycle. Come on, Master Shan will kill us!"

Miyer ran after him. "Everyone else is already there!"

Meanwhile, in another part of the Temple...

"And that's why we don't leave the Temple without a Jedi supervisor. Is that understood?"

Shan sighed. "You're late. Both of you. Again."

Miyer chuckled, rubbing the back of his head. "Well, funny story-"

"You always have a funny story. Kenobi, Direds, to your seats. You both are just in time for the next lesson. Behave, and perhaps you won't get in trouble. Again."

"Yes, Master Shan," they both said. They hurried to their seats.

Weido could feel his face get hot with embarrassment.

"Our next lesson is about the origin of the Force."

She extended her hands. Slowly, Weido felt the force pushed him into her mind. He could see exactly what she wanted them to see. A mountain with a temple on the top.

He then heard Master Shan's voice.

"Long ago," she began, "the galaxy was not as it was now. The technology was not nearly as advanced as it is now.

"The Force was unknown. No one, no Jedi, no Sith, knew what it was, or the fact that it existed.

"Until, one day, monks meditating on top of a mountain found something."

The scene changed repeatedly. It then went to the temple.

"There were 6 monks. (A/N: not sure if this is true. just put it here) As they meditated, one monk went deep into the astral plane.

"It was then that he discovered it. The Force.

The monk opened his eyes.

"Soon, he reached his fellow monks, revealing the abilities of the Force. The Force could not be used by all beings.

"Midichlorians were soon discovered. The more midichlorians a being had, the more strong in the Force they were.

"The monks went on to be known as the Jedi. Moving on, the monks taught others about the ways of the Force, and eventually, it spread throughout the entirety of the galaxy.

"But of course, where there is good in this world, there is evil. One monk discovered more to the Force than the others knew. A darker power resided within the Force.

This monk unlocked the true power of the Dark Side. The first Sith.

"But the others knew. They knew he had become corrupted. They had no choice but to destroy him.

"The Sith, now known as Darth, was expecting this. Unfortunately for the Jedi, he was all too powerful.

"He could unleash bolts of Force Lightning from his fingertips. He could choke a person within a second. He was the strongest person in the galaxy.

"4 monks were killed. The fifth disappeared without a trace, believed to be dead.

"Darth knew that he was a god, unlike any being before.

"For decades, Darth ruled the galaxy from the shadows. Anyone who challenged him was not heard from again.

"But one day, someone came, requesting to challenge him.

"Darth believed that the man was foolish, so he accepted his challenge.

"That was his first mistake."

The image showed a cloaked man walking up to Darth. Darth smirked, taking off his own cloak. He quickly ignited his lightsaber, getting into a battle stance. The other man did nothing.

"Darth was confused. How come the man was doing nothing? He grew bored. It was time to finish this.

"That was his next mistake."

Darth growled. He sprinted ahead, ready to swing up his red blade.

"Darth didn't expect this. He sliced through the cloak, barely missing the man. The man quickly ignited his own blade, deflecting the attack."

Darth looked up. He saw a blue blade against his own. His face twitched. He seemed... nervous.

"The man was the 5th monk. In his absence, he went deeper into the Force. He came to defeat Darth, once and for all. Whatever it took."

Darth backflipped, and as soon his feet touched the ground, he unleashed a hurl of electricity. Force Lightning, as it was said. Only certain Sith could use it.

"The monk's name was Jae'rn. He was ready for all of his fallen brother's attacks."

Jae'rn ignited a second, green lightsaber, forming an X with both.

The lightning deflected to the ground. Darth looked... worried.

"Darth was worried, indeed, none could best him. And yet...

"The lightning was his final mistake."

Jae'rn took a step. The lightning went closer to Darth.

Darth seemed determined to win. He didn't stop blasting, which was wrong. He just didn't know it.

Darth took a step back.

It was then Weido noticed the circle surrounding them.

Darth couldn't do anything.

Jae'rn used all of his strength to move forward.

The bolts began to strike Darth.

He began to shake.

Jae'rn knew it was time. He pushed forward, causing the bolts to directly shock Darth.

Jae'rn thrust his blades together, causing the bolts to get closer and stronger towards Darth, melting his flesh.

Darth cried out. His hands were fried, the flesh slowly melting.

His bones were showing, which is why he stopped.

This is what Jae'rn was waiting for.

He moved his lightsabers down, then up to slice him.

For the final blow, he put away his own blades, getting Darth's red blade to slice upward, killing him.

Darth barely even reacted. His face was deformed, his body broken.

He collapsed, smoke emanating from his corpse.

His face had a strange expression, an eternal scream. His eyes were wide, empty.

Jae'rn looked at the red blade. He crushed it, tossing it with the corpse.

"Now Jae'rn knew. This was his brother once. Who killed his family and loved ones.

"This is the code's origin.

"Jedi are not to have attachments, as they are forbidden.

Weido just stared. He looked at the corpse. What did attachments have to do with the creature from... hell?

"Jedi must not give in to feelings of evil and hatred, and emotions.

"Jedi must never break the code. Ever."

The image disappeared. They were back in the classroom.

"And that's it. There is indeed more to the code. But time is up. Any questions?"

The class was silent, as if they weren't there at all.

"Alright," Master Shan said. "Then you may leave. I shall see you the next day."

The class seemed to leave in a hurry after that.

Weido lay in bed. Something was bothering him.

Miyer groaned. "What?" he said groggily.

"Do you ever wonder about the code?"

It was true. He was curious.

He had always thought this. Every night, he lay in bed. He thought of who his family was.

He could see people, but their faces were blank and had no resemblance to him.

His questions were never answered.

That also happened every night. Something interrupted his thoughts.

Weido sighed. He turned around, tuning out the noise.

Before he knew it, it was daytime.

He yawned. This time, he woke up early. Good. That wasn't often.

Weido woke him up, and soon, it was time for lessons with Master Shan.

But as they passed the Archives, Weido froze. He felt something. Something... strange.

Weido waited till he was far enough, then he turned and quickly ran to the Archives' door.

It was locked. No surprise.

But he had been here since he was 1. In the 12 years that he'd been here, he knew a few things.

He heard footsteps behind him. Right on time.

To his left was a conveniently placed closet. He quickly ran inside, shutting the door quietly.

The footsteps were close. Using the Force, he could feel the Jedi walking to the door.

He opened the door a crack. He could see the Jedi opening the door. He waited for the Jedi to walk in, then made his move.

He ran to the door, using the Force to hold it open.

It was big, so he needed to run inside.

He quickly managed to run inside, the door closing behind him.

No way out now, he thought.

He looked around. The Archives were huge, with large holo-shelves on either side.

He searched for... something. As he searched, he heard the doors open.

He spun around. His eyes went wide as he realized that the people walking in was his class.

His class. The very thing he hoped to avoid, but it seemed that life had a sense of humor.

He looked around in a panic, looking for somewhere to hide.

There was a large circular door, and it was partially open.

Quickly, he ran inside, shutting the door.

He sighed. He was safe.

He looked around. There were holocrons all around. He knew he couldn't stay here forever, so he used the Force to see which one he needed to see.

He used the force to activate it.

It soon displayed a home. A cloaked man was walking to it.

He knocked on the door. Soon, a blue Twi'lek opened the door. "Yes?" she asked.

In her arms was a child.

He nodded over to the child.

"Well, he's only a few months old, not even a cycle. What could you want with-"

He moved his robe so she could see his hilt.

He extended his hands to take the baby, but she stepped back.

He used the Force to lift the baby. Out of the care of its mother. It was asleep, otherwise, it would be crying for its family.

"Please!" She grabbed his robes, pulling him. He cast her aside.

The husband came out. "What's going..." He saw his child being stolen away.

He ignited his blade, injuring him.

The wife held her love in her arms.

He ignored them, heading to his ship.

He felt hollow. Was this what happened?

It was then the Holocron slipped out of his grasp, making a loud clattering noise.

It banged onto the ground loudly.