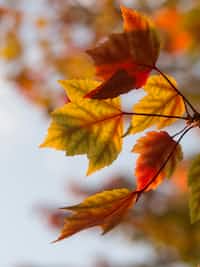 fivecents The crows are calling for disaster
Autoplay OFF   •   a month ago
Transcript Use Images
CoMixed from @commaful: https://commaful.com/play...
equanimity - mental calmness, composure, and evenness of temper, especially in a difficult situation.
fiction #fallingintoautumn2021

She sat there, on the swing, letting the cool wind chill her bones. It was early autumn but Celia could already sense the cold of winter trying to push it's way into town.

For now however, everything was peaceful. She could hear birds chirping off in the distance and the scraping of leaves as they blew onto the rough pavement of the road a few yards away.

Celia often came to her old tree swing to sit and ponder. She liked the way the world seemed to pause when she was out here. It was a refreshing break from life, a place to relax and be herself.

Today in particular she was thinking about her older brother Noah.

Celia let the wind blow her long golden brown hair back from her face and lightly pushed the ground with her shoe, letting the swing pull her into it's familiar back and forth rocking.

Noah always liked autumn the best out of all the seasons. She smiled slightly as she remembered two years ago when he won first prize in the pumpkin carving contest.

That was one of the happiest days of his life, making it one of her favorites now as well.

Noah was so excited when he found out he won that he ran through the neighborhood whooping and hollering, hands in the air and an undying smile plastered on his face.

He truly did love all things autumn she thought again as a tear slowly slipped down her cheek.

Celia watched as a red squirrel scurried up a tree on the other side of the street, acorns piled high in the little fellow's mouth.

Off in the distance she could hear some of the younger kids in her neighborhood squealing with delight at whatever game they were playing.

Back and forth went the swing ever so slightly as Celia sat in the tranquility of it all. Autumn was her favorite season now too she thought with another sad smile.

The crisp air, smiling faces, the nights cuddled together with apple cider, and all the wonderful memories with their family was reason enough.

Another memory came to Celia as she ran her fingers ever so gently against the rope of the swing. Noah always loved apple pie.

He would go crazy every year and be up to his ears in apples. He never liked any other kind of pie, weather that be cherry or pumpkin, it always had to be apple.

Celia made a mental note to bake an apple pie later. She watched as a leaf from above softly floated down onto her lap. She picked it up and spun it slightly between her fingers.

It had been a year since Noah had died. Another slow tear came rolling down her face. She wiped it away and gave the ground another tiny nudge. Back and forth rocked the swing.

Noah was the happiest person she knew, and her roll model for as long as she could remember. It didn't seem fair that this had to happen but there was nothing she could have done.

The doctor said the cancer spread so quickly he was lucky to have lasted as long as he did.

The doctor said the cancer spread so quickly he was lucky to have lasted as long as he did. Back and forth

Noah used to play this game with her every autumn, leaf pile brainstorm he called it.

Together they would build the largest leaf pile they could, then whoever found the most creative way jump into the leaf pile won. They would ride bikes into it, or jump from the swing.

At the end of the game they both had so much fun just playing together that there was never a true winner.

Celia looked out over her yard where there was no leaf pile to be found.

She let go of the leaf still between her fingers and let it drift soundlessly to the ground. Back and forth rocked the swing...

Celia was an only child now, her brother was all she had. When he left her she was devastated, even mad at first. She didn't know why she was mad, she just knew that it had hurt,

Celia was an only child now, her brother was all she had. When he left her she was devastated, even mad at first. She didn't know why she was mad, she just knew that it had hurt, a lot.

Back and forth rocked the swing. Celia now closed her eyes.

Through her sweater she was finally starting to feel a bit chilly, but she stayed put in the peace an tranquility of the early autumn day. She loved her brother and that was a fact, everyone did.

But unfortunately the past is not something that can be changed, only accepted. Tears were falling more frequently down her face now.

Noah was her hero, the person she had always wished to be. Now he was her favorite memory. A memory that would push to her live with joy.

A memory that would encourage her to see the world as positively as he once did. Noah isn't here anymore, but Celia will never forget the shining light he was to her.

Back and forth swayed the swing as the birds chirped and the leaves scraped against rough pavement, Celia's golden brown hair blowing in the wind.

Thank you all for reading :) - @fivecents