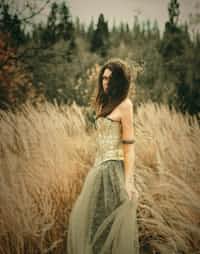 filmrose Simply a writer.
Autoplay OFF   •   a month ago
Transcript Use Images
A strange romance blooms between a troubled prince and a troubled girl.
romance romancea filmrose originalchess seriesroyalty

The moment Chess's eyes fell upon her face, shock ran through his body.

She was dressed in a lovely turquoise gown with white butterflies fawning all across the bodice and skirt of the dress. Timidly she stepped toward him, her smile uncertain.

She lowered her eyes, blushing profusely. "It's been a while, Chess." Her voice was laced with French from what appeared to be years of travel.

Grace blinked in confusion and turned to her brother who still stood there, his gaze still transfixed on the beautiful woman.

Mercy curtsied and extended a hand to the princess with a shy expression. "I'm Mercy, an old...friend of your brother's."

Grace raised an eyebrow at her brother and politely shook Mercy's hand.

"I'm sure you're a very good friend of his," She implicated, causing Mercy to suddenly become very interested with her French braid.

Chess shot a glare at Grace who in return stuck out her tongue.

"You never told me you had a French girlfriend," Grace pouted.

Chess rolled his eyes. "That's because I don't have one and never have. The accent is new."

She grinned mischievously and dramatically clutched his shoulder. "You didn't say she wasn't your girlfriend," She replied with a cocked eyebrow.

He sighed in annoyance and pulled away from her. "Ugh, we never technically dated. And I know that you're going to go on and on about it if I don't tell you anything.

So, fine, you get to ask a single question. And that's it."

Grace paused in thought but before she could speak the announcer presented, "His majesty and the queen!"

The room seemed to silent as the queen and king entered the room, seating themselves on the royal thrones.

Amongst the nobles Chess and Grace were the last to approach their majesties.

The king's unsmiling face scowled silently at his children.

The queen nodded in agreement with her daughter but there was a slight edge to her expression.

"You may leave," The king commanded.

Both his children departed but as Chess turned to leave he heard Grace's voice, "Did you ever kiss her?"