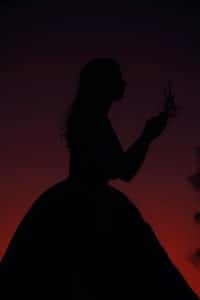 filmrose Simply a writer.
Autoplay OFF   •   a month ago
Transcript Use Images
At first Mercy wished to rekindled the flame with her old crush (Chess) but when memories come flooding back to her she isn't so sure. As Mercy said, "Love Is So Frustrating."
romance chess seriesfilmroseromancehopehope-loveroyaltyroyals

When Mercy awoke remembered the events of last night immediately.

The way Chess had looked at her, watching the stars beside each other, holding hands as he led her to the gazebo, the gentle kiss he had placed on her hand...

"Love is so frustrating," She muttered in annoyance, but her heart warmed when she thought of Chess.

He was her knight in shining armor; handsome, brave, kind, caring, compassionate, calm, smart, all the things a girl could want and more. But, it was complicated.

"Love is so frustrating," Mercy grinned, hugging a pillow to her chest.

The rest of the day drew out in rather small events.

She wanted to see Chess, but kept her distance.

Everything from last night was so confusing! Did he have feelings for her?! Was it all just a big fantasy? Dare she declare her feelings for him?

That morning she stayed away from breakfast though she wished to see him. Spending most of the hours in the garden she daydreamed and wrote in her journal when inspiration.

"What are you writing," A voice rang.

Pausing, she looked up to see Grace and dressed in a white button-up shirt, black slacks, dress shoes, and a tailored vest was...the prince.

He looked curiously at her journal with a slight grin on his face. It appeared her disappearance from breakfast hadn't fazed him in the least.

"Uh, nothing," She stammered, her face red.

Grace slid onto the stone bench beside Mercy and stole a glance at the open journal. She was clearly enjoying the soap opera between the two.

"Do you write?" The princess inquired, gesturing to the notebook in Mercy's lap.

Shaking her head Mercy explained, "N-no, not really. I just scribble some story ideas to pass the time."

Chess chuckled. "As I remember you used to write all the time."

She stared at the pages in the journal and quietly replied, "I stopped writing after my inspiration left me..."

"Why don't we go on a walk in the gardens," Grace suggested.

At first Mercy truly wanted to accept but she stopped herself. "No thank you. I appreciate the offer though."

She stood and walked to the castle leaving Chess and his sister alone.