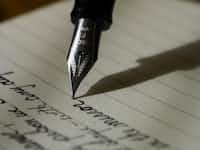 filmrose Simply a writer.
Autoplay OFF   •   a month ago
Transcript Use Images
The king orders Creador Shaft to write the best story ever in a year...or else he'll lose his head.
fiction stories

'Creador Shaft was an impeccable boy with chestnut brown hair, stormy gray eyes, a dimpled smile, and incredible tales which were said to conquer any bard in a duel of words.

His mother, Eleanor Shaft, had a welcoming personality, chocolate curls, cobalt blue eyes, and words almost as sharp as a knife much like her son's.

She was the best seamstress within miles and loved to gossip with others in town as she sewed. She had taken a particular liking to Mrs. Carlson, a fellow seamstress of hers.

James Shaft, Creador's father, was a man of many words, he had sandy blond hair, gray eyes which his son had inherited from him, and a mind full of wit.

Creador Shaft was raised in a cottage West of town and East of the wood. He was an only child causing him to treat the children in town like his siblings.

The children adored him and his stories. Every Friday they would gather around him and wait for one of his amazing tales. And every Friday he never disappointed them.

On November fifth a merchant and his son passed through the town. The boy claimed he could duel Creador in a battle of words and be victorious.

One of the town's children told Creador and Creador being full of himself agreed. The following Friday the children gathered around to see the boy and Creador spar.

The boy who claimed himself better went first. The children hung onto every one of his words but did not wish to hear more of the struggles he faced when traveling the world with his father.

The boy's words were exceptionally good but he lacked something Creador was skilled at. The boy could not describe a story as best as Creador.

Once the boy was done with his story Creador began his.

At first his story was merely simple sentences but soon it grew into a wide array of characters, settings, conflicts, descriptions, and so many more things.

As his story came to an end the boy scolded himself for wanting to hear more of Creador's story. After all the town's children left, the boy turned to Creador.

They smiled, exchanged words, and departed from the scene. The next morning Creador found himself exploring the town.

He had only explored as far as the market in all the years he had lived there but something forced him through the town. As he passed the children's houses whispers and questions followed him.

Soon a crowd had gathered and were constantly asking him questions. His thoughts drowned out their words, placing him in an entirely different world.

When the wood was only inches away he stopped and glanced at the children around him. They had stopped as well and were observing the scene.

Had the wood compelled them to come as well, Creador wondered. He shook his head and slowly dared to enter the wood. Beside the trees he stared at the confused children.

They were about to follow him inside the wood but each let out their own cry of fear as a beast emerged from the forest.

Creador turned towards the beast, seeing it was only a mutated rabbit made him chuckle. The ground beneath him shook as it descended away from him.

He smiled to himself, surely the children would think he'd thwarted the beast. When he arrived at the market there was a sea of children playing games.

They ignored him completely as he walked in front of them. They seemed as if they were under a spell of which they could never wake up from.'

Creador looked up from his journal wondering why in the world the king had stopped him in the middle of his story. He peered at the king intently assuming the king didn't like the story.

The king could easily kill him and Creador knew it. His respect never showed for the mighty king after all the king had sent his guards to escort Creador away from the town to tell him a story.

His men had said the king wished an audience with him but Creador just thought it was a strange way of them begging him to tell the king a story.

He had gone willingly but only because he knew the king would have him or his parents killed. He had ridden in a fancy carriage with all the things a person could want-except freedom.

Why couldn't he have just listened to a story in town, Creador thought. He tightened his grip on his journal and sighed.

The king analyzed him with two yellow eyes which almost seemed like they belonged to a feline.

Creador had heard rumors from his mother that the king wasn't really human because he was so emotionless but Creador never believed such things.

Maybe he really isn't human. Creador ran a tired hand through his hair and crossed out his story with a pen. He bit his lip, this story had taken him hours to perfect.

He explored the replies he could give the king but there were so many possibilities it was overwhelming. He drew in a breath and clutched his journal tightly.

"There are mutated animals, my liege," Creador replied casually.

He needed to make the king think he wasn't fearful of him, that he wouldn't care if he did something to him. The king raised an eyebrow but said nothing.

The room around them seemed to darken from the silence. Creador released his grip on the journal causing it to fall in his lap. One slip up and the brutal king could kill me, he thought.

He focused his eyes elsewhere from the king's but couldn't help but feel his interrogating gaze.

"Guards," The king called. "Escort our guest to his room, tell him he has a year to write me the perfect story."

Creador gaped at him and then plastered a fearless expression on his face. He had to be brave. The king cocked an eyebrow and sweat dripped down Creador's brow.

The guards appeared at the door only a moment later, holding the hilt of their swords.

"And tell him," The king continued. "He will lose his head if he hasn't completed it by then."