Commaful
Art Of A Master 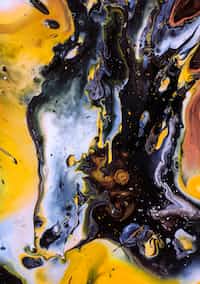 filmrose Simply a writer.
Autoplay OFF   •   a month ago
Transcript Use Images
The simple life of Margaret Annaleeus and her thoughts.
fiction artlifethoughts

Art Of A Master

As the titanic waves of the ocean breathed raging breaths of watery graves the waves pulled forward with a strangely hand-like force, reaching through the painting crafted by a master painter,

Margaret's startling teal-blue eyes roamed the canvas with an expression of awe, awe for the master painter's work, and awe for the colors chosen to do such things.

The waves were an unusual gold mist spreading across the thick, white page with strings of carefully placed metallic silvers, bronzes,

and coppers occasionally shading into gray-blues and lighter or darker shades of the metallic paints themselves.

A girl's face was part of the wave,

she wasn't swallowed by the golden mist of the paint but was the wave itself with hands of pure gray-blue reaching towards whoever looked at her pleadingly; eyes of copper, lips of bronze,

hair of gold, and mixes and shades of artistic visions following her beautiful face's portray.

Margaret's father absent-mindedly tapped a pen against the thick pad a paper he carried with him nearly everywhere,

as an art critic he was always staring misty-eyed at paintings in thought as he efficiently scored them in his mind.

She glanced at his pad which had not a mark of print from his pen and sighed, what was the purpose of having a pad if it was never used?

What was the purpose of a father if he never noticed his daughter?