Commaful
The Clock is Ticking [ Part 2 ] 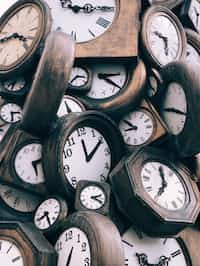 fiddlesticks24 I just need apple juice....
Autoplay OFF   •   a month ago
Transcript Use Images
I'm sorry if this was late...
the clock is tickingsimpart 2part2

Everyone was peaceful with a time problem thinking that it was Monday's fault Little did they know... *BOOM* Suddenly the roof was breaking down and everyone was screaming Someone on top of the roof chuckled

"Hehe yes scram you rats, it's my turn to shine!" said Tae The police came in the scene and started to gaurd uo "DROP YOUR WEAPONS" yelled an officer "Tch..." he then snapped his fingers and suddenly he went in a few minutes further

The police were lifeless on the ground, guess they got hit by the roof "Adrastos c'mon, or you're going to die!!" yelled Daxtor "I'm coming, but WHO is that?" asked Adrastos as he started running "Who cares!" said Daxtor thinking about safety first

Meanwhile Dallas was following Zoey somewhere "Z-zoey where are we going?" asked Dallas sounding scared "Well I first am going to find safety, I don't want to be here..." replied Zoey "Can we come too?" asked Windy standing beside Mission

Then she heard some rustling so she picked up a stick and went closer Then suddenly Daxtor popped out, Cinder yelped, and then she sighed "Who are you?" asked Cinder Adrastos popped out too and answered, " I'm Adrastos and he's Daxtor"

"Oh I'm Cinder, is there anyone else there with you?" asked Cinder "No" replied Daxtor Suddenly 4 people appeared They all looked tattered "Who are you guys?" asked Dallas

Everyone started to introduce themselves and then finally it became quiet "So where are we going now?" asked Mission "I don't know but we have to go somewhere..." sighed Zoey "Well we have to go back to our family first" said Mission

"Same my sister is probably worried for me" said Windy Everyone agreed, they were all alone in a forest without any help "Well we should start walking so we could see something!" said Daxtor in a hopeful tone "Yeah..." said Cinder

The seven walked for about 2 hours, Almost everyone was tired and wanted to rest "Hey what time is it?" asked Windy "It's 7 pm???" said Adrastos sounding confused

"What? We left school from about 2, and it's felt like only 2 hours..." said Dallas "Hey guys look!" said Zoey as she pointed at something Everyone started to approach her and looked at a cave she was pointing "Maybe we could rest here?" said Mission

"Ya sure" said Adrastos as he walked inside Everyone followed him finding something that would just help them... To Be Continued ~