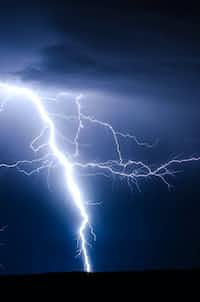 It didn't take long until the sound of the thunder became too loud and the flashes of lightning became too bright for her to handle. But the girl was determined to face this silly fear of hers.

She grabbed her rainjacket, but on her boots and walked over to the door.

Was this really the time she would overcome her fear? Would she regret it the second she opened that door? Probably, she thought.

She carefully started pressing down the door handle, her whole body was shaking. Come on Ella, you can do this.

With that, she pressed it all the way down and the door swung open due to the strong wind. There she was, all alone in the pouring rain and flashing sky.

It was at that point that she realized there was nothing to be afraid of. The thunder was just a sound and the lightning was just a flash, probably thousands of miles away from her.

She thought back to when she was terrified of it, and thought, what a silly fear.