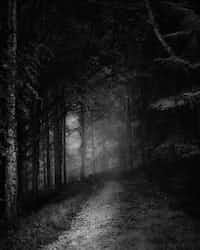 falqon Community member
Autoplay OFF   •   7 months ago
Transcript Use Images
Creatures from the world of demons suddenly appeared in the world. At the same time, people were gifted with the knowledge of ancient magic. Ethan Taylor , as a fighter of an association specialising in cleansing the abodes of creatures, experiences a great tragedy. Now he must find the cause of this anomaly to make amends to his companions. Soon he discovers that his powers come not only from ancient magic ...

Anger... perhaps not quite anger, more a sense of injustice, though it is close to anger. Despair... though not quite that either... more a question "why?".

What else can one feel and how can one even describe such feelings while standing over recently laughing, happy, talkative companions... wrong again...

FRIENDS , now lying on a gurney in a widening pool of blood.

"How...? How is it ...?" Howards repeats to himself, staring at his subordinates, whom he has personally seen off before being sent to another suburban 'cleaning job'.

It was a solid team, most of them had known each other for three years, only two months ago two rookies joined,

quite promising in terms of their abilities to gain experience in combat and then lead their own teams or join a special forces unit.

It's true that they acclimatized quickly, but it's hard to speak of anything like 'harmony' between them and the rest within two months.

Despite everything, they treated each other like brothers and sisters.

It is hard to find another relationship, after all, they were completely dependent on each other, they even offered their own lives.

And the common experiences and dangers they faced strengthen such bonds even more, it's easy to find a feeling in such moments "this is my family".

And now I look at them, all covered in blood, at running around the members of the medical team, and emerging from the next door leading to the main building comes the doctor.

I don't know if I'm just starting to realize that this could all be my fault.

Is it because I wanted a break from the mission, for the first time since I've been here, and therefore wasn't able to defend them,

or because I was working with Howards to develop a mission where the 'new guys' could practice without risking their lives. Either version makes me guilty...

there's no point even making excuses... I put them in danger, now I need to know why. All the readings from the scouting party said that the town square would be one of the safer choices.

So what was I missing? The racing thoughts didn't help at all in the current situation.

The doctor had already examined my comrades' injuries and began first aid, writing a few lines of an ancient language in the air with his finger,

on which most of the magic we know today is based. After a quick glance at the written phrases, the trained eye immediately recognizes a second-class spell.

"Is it very bad?" I asked the doctor, pointing to the slowly fading glow after the spell.

"It could have been a lot worse... They were very lucky, but you can also see the effect of the experience.

It looks like the defensive spells they used weren't enough, and they focused on defending the vital body parts at the last minute. That's probably what saved them."

"Are they going to get out of this?" They'll definitely get out... they have to get out, they're too strong...

"At first glance, yes, but I can't assure you that they'll make it. As I said, the experienced ones were able to prepare well, but these two..." He pointed at two new members of the team.

Their wounds were much more serious, it could be seen at a glance. They must have been caught off guard by the breaking of one of the guard's defensive spells, leaving them unprepared for...

"Please follow me, as leader you have every right to be with them."

"Ethan, follow me!" I heard a loud shout coming from behind my back.

Turning around, I saw the Director in the same door the doctor had come through. He is the most important person in the entire complex.

Although he had no military rank, his magical powers, as well as his hand-to-hand combat skills, whether analytical or strategic, were unimaginable.

His mere presence, it seemed, lowered the temperature of the room, and moreover, one could feel the overwhelming energy that only encouraged one to move away from this place,

and preferably as quickly as possible.

"Yes, Mr. Director!" I called out and stood up, then with a quick step I followed his figure, which was already disappearing into the corridor.

When I entered it, there was no trace of the Director. But it doesn't take a genius to know to go straight to his office, and it's best not to keep him waiting.

The Director is one of the Association's greatest secrets. His name is only known to two people in the entire building, and I've seen them maybe a couple of times since I've been here.

Apparently he's on the same level as the Seven Greats, the strongest mages and warriors in the world.

He himself looks like an old man of about fifty, with gray hair, a short, neat beard, and a scar that goes from the corner of his mouth to his ear.

But for his age, he was better built than most of the people here, and even if they are, they are certainly no match for him in any way,

and a mere glance would be sufficient to keep them from fighting.

After a short walk through the corridors and a ride in the elevator to the top floor of the building in the center of the complex, I found myself in front of the Director's office door.

"Eh... you only live once, I had to come here for the first time." I said under my breath, additionally cursing the events that forced me to confront the Director.

I knocked three times with the back of my clenched fist on the modern old oak patterned door to his office.

When there was no answer, I slowly picked up the handle and carefully opened the door so I could step back into the safe corridor in case of emergency. You know... just in case.

The Director was facing the door, behind his desk, resting his head on his hands and looking at some document in front of him.

"Team Seventh Leader Ethan Taylor, Report on Orders." I replied a moment after entering, standing at attention and saluting.

"At ease." Muttered the Director, looking up from the paper and reaching for a pen. "Sit down."

I walked over to the desk and sat down in the chair he pointed to with the pen, lifting it from the desk.

No, it wasn't your fault, I've already checked the details you confirmed, Howards sent them to me just before they left. It wasn't a mistake, but there was still an anomaly.

That's why I called you here." He said, right after I took my seat.

In my soul, I thanked God for not directly contributing to what happened to them. I have no idea if I would be able to handle that guilt.

Aside from the conviction, expulsion from the club, and possible jail time, the worst thing would be to look them in the eye afterward ... People who have relied on me almost infinitely.

"I don't understand this, can you please explain?

I didn't participate in this mission, nor did I receive a record of its progress because I don't have such rights, so I can't conclude why the Director called me here.

" I honestly didn't expect more detailed explanations, due to my low rank and resulting lack of access to information higher than confidential.

"Your skills can develop very well. Not only in martial arts, but in magic as well. Since the video you speak of has been corrupted, we can't tell what happened there..."

"So the only information they can give us is..."

"Seventh Team Members who can't at the moment" He interrupted me "But we don't have time to wait for them to recover,

if what happened there was capable of injuring such seriously experienced warriors, we must respond immediately."

"Mr. Director, would it be wise to send people back to an unexplored place?"

"I didn't finish speaking..." He replied. "Therefore, I am creating a temporary special unit, whose members will be announced tonight during the meeting at dinner."

"Mr. Director, I would like to request permission to join this unit as an observer, just for the duration of this mission... Learning the cause of what happened to my friends is my priority.

That is why I am asking for such a reckless request that is beyond my authority!" I even exclaimed the last sentence...

I closed my eyes, waiting to be accused of abusing a situation or exceeding my authority in rank. However, after a moment of silence, I dared to glance at the Director. He smiled...

"I do not accept your request." He said in a serious tone, and his expression immediately turned to stone. "You will be drafted into the special unit as a member.

Since you know them, you are one of the best choices, as you will be able to comprehend their probable actions on the spot."

I didn't know what to say... I stared at him in disbelief. I've heard a lot about special forces. Unfortunately, only heard.

Hardly anyone has seen them, but they are unimaginably powerful compared to the rest of the Federation's forces, the teams.

They don't operate under the supervision of commanders like Howards, but report directly to the Director. And now I've become a part of such a unit?

"March off!" the Director shouted, standing up from behind his desk and waking me from my thoughts. I straightened up, saluted, turned on my heel and left. I looked at my watch...

"What?" I tapped it. I reached for the phone that was in my uniform pocket on my left shoulder. I checked the time... "How in the world could not even a minute have passed?!"