Commaful
We Play Uno with Our Turtle...That Was a Big Mistake 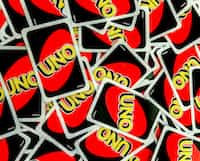 eno_leto Don't waste the time you have.
Autoplay OFF   •   5 months ago
Transcript Use Images
We have 356 days left.
eno leto356 days left

We Play Uno with Our Turtle...That Was a Big Mistake

"Ok loser stop being a nerd and get up, we're going to play Uno," Eno said to Leto, who was reading a book.

"Must we?" Leto asked with a sigh.

"We haven't gotten another request yet, so we're doing what I want to do today," Eno replied, sorting the cards.

"Let Cosmo play too," Leto said as they placed the turtle gently onto the table near a stack of cards. He started nibbling at the corner of an Uno reverse card.

"Prepare to lose fellow children, because I am the master of Uno," Eno smirked. Leto rolled their eyes but didn't say anything, although they were inwardly grinning like an idiot at the amount of +4 cards Leto got.

------time skip brought to you by a sleep-deprived Leto, who wrote this at 2 am just like they do with all of their other posts even while not on this account------

"HOW IS THIS POSSIBLE?!" Eno shrieked at the mountain of cards they now had on their pile. Cosmo was the one who gave Eno all those cards, and he wasn't necessarily merciful with Leto either, who had a slightly lesser amount than Eno, but it was still a lot.

The turtle should've won 10 minutes before now, but Cosmo was a sadist because he clearly enjoyed seeing Eno suffer as he used a portal to continuously drop +4 cards on Eno's pile.

"Cosmo is my spirit animal," Leto smirked as Eno stared at their pile in defeat. "I like this version that he came up with."

"Oh shut up," Eno muttered, putting their head on the table.

Cosmo gave Leto a fist bump with his tiny claws as they both watched the competitive Eno drown in their misery. It was oddly satisfying.

When playing Uno with a magical turtle, always remember this: The turtle will always win no matter what. Don't try to resist it. If you readers have any story ideas or just any ideas in general on what we should write/do next, then please tell us. We're willing to do challenges, prompts, deep discussions, poetry, anything.

And remember, time is a precious thing that most people take for granted. How will you spend it? ~ Eno Leto