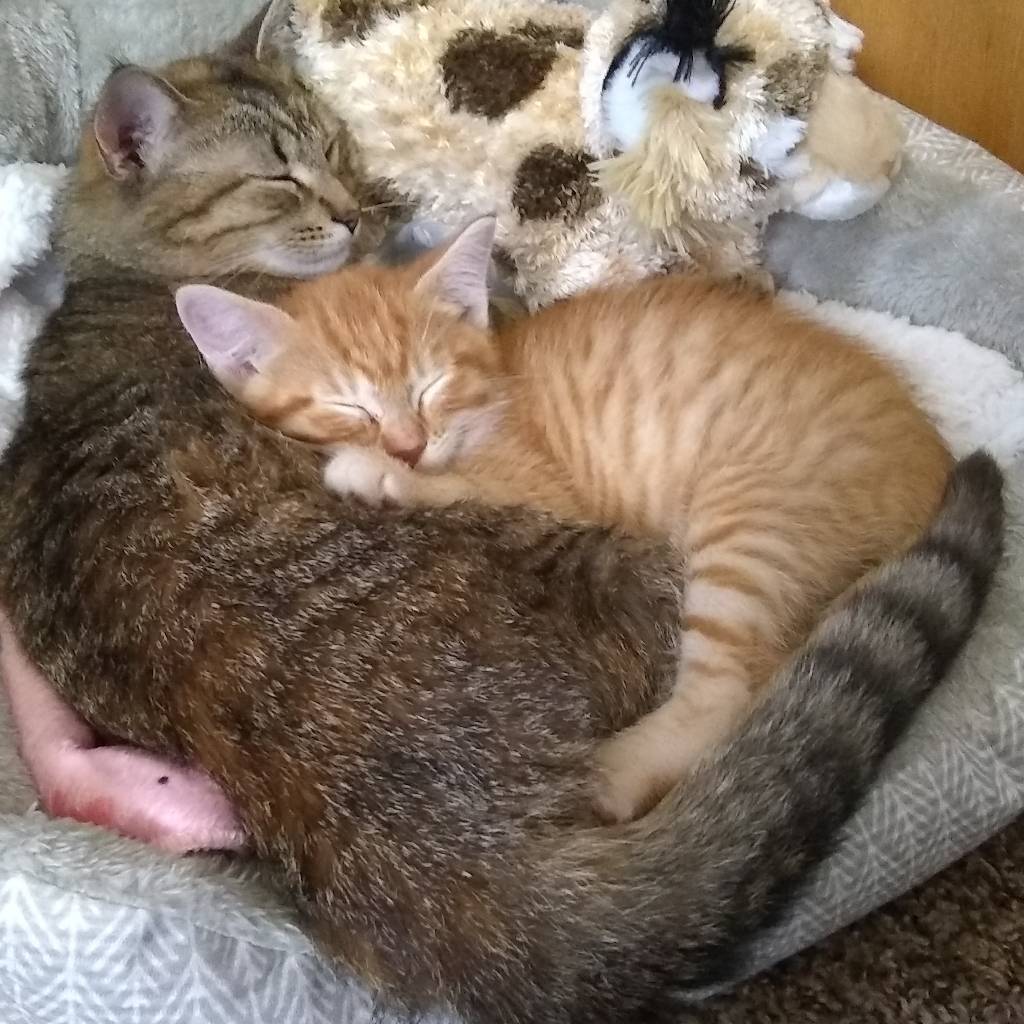 It's been 2 Earth days since the human female, Stella, has taken me in to treat my injuries.

They are nothing more than a few decent sized cuts and scrapes, yet she insisted that I stay under her supervision. In that time I've gotten to know her better.

She likes a liquid that was heated with beans in it, she calls it "Coffee". The smell of it is quite strong, and it is the same color as my hide.

She says that it gives her energy in the morning, perhaps I could use it. I've been feeling slowed down since I've made it to Earth.

I've been introduced to her human technology, it's much more... simpler than ours. Lots of it is used for entertainment for them, I had to restrain myself from it.

It's an evil thing, it easily draws you in and renders you immobile. She spends her evening watching it while eating some kind of frozen food. She calls it "Ice Cream".

She trusts me enough for her to fall asleep on her chair in my presence. I was considerate enough to make sure she was warm, by covering her with a blanket.

What? I don't want her to freeze to death. Humans are so thin skinned, they could easily die from hypothermia.

I would almost feel pity for them if it weren't for the fact they destroy everything they touch.

This morning she made a meal for me, it consisted of lots of meat and protein. After one bite, I could tell that lots of it was processed.

I wasn't going to deny that some of it was good, but I know it's not good for me. The utensils were tiny in my large claws. I tried my best to eat with them, but I lost my grip a few times.

I suppose I could have done something to make it easier, but that would've required me to go back to my pod.

In my pod, I have a device that can do something special, it can make me human as long as it's on me.

My original plan was to get to Earth and disguised as a human, but it didn't work out as well as I planned. For now, I must wait until I get a chance to sneak away and get to my pod.

That way she will have no idea what I look like once I'm amongst the other humans.

"Vultin- Earth to Vultin! Are you alright? You were spacing out."

"How many times do I have to tell you? It's Captain Vultin."

"I'm sorry, I mean no disrespect, it's just a lot more to say than just Vultin."

"Hmph, I suppose you can be forgiven."

"Thank you, Vultin, I will try my best to remember to refer to you by your title."

"I would greatly appreciate it if you could."

Stella laid back in her chair, her dark blue sweater covering her mouth from view.

I've noticed she does a little expression when she looks at me, it's a bit of surprise mixed with what I think is fondness. It's an odd mixture, like she can't believe that I exist.

It's kind of cute, at least as cute as humans can be.

What? Wait, did I just call her cute? That can't be good. I can't start catching feelings for a human. Not only would it be treasonous, but it'd interfere with my mission.

If I start to get comfortable with a human, they'd just send down someone else to get the job done.

I got up from where I sat, looking around the room. What am I doing? Taking orders from a human? I shouldn't be doing that, I am a captain for fuck sake.

I need to get out of here before I become attached to her.

"Captain Vultin, where are you going? You are still healing-"

"Away from this place, I have a mission to complete-"

"What do you mean-" before she could finish her sentence, I rushed out of the cottage and flew back to my pod. I had to make this quick, or she could catch up and see everything.

I rummaged through my destroyed pod, taking out what little bits of functional technology there was left.

I took out the small device and put it on my body. There was a dim flash of light that filled my vision. When the light cleared, I noticed right away that I had changed.

I was much shorter, about 6'4" in height. My skin was a lighter brown than my hide was originally. I used a bit of metal to see my reflection.

I had medium length black hair, and grey eyes. Huh, for some reason I think I quite like this look. I need to get proper clothes though, I can't just stay in these... white undergarments.

I don't think humans would take too kindly to the sight of me like that. I straightened myself out and started walking in the direction of the nearest town, South New Castle.

Once I reached the outskirts of South New Castle, I tried to stay out of public view, sneaking through the alleys. Luckily, it was still fairly dark outside so it'd be easy for me to hide.

I perked up a little when I spotted a box labeled 'Free'. Inside was a lot of clothes, I pulled out a black jacket, a grey dress shirt, black pants, and dress shoes.

Heh, I think this looks pretty nice, but it's not complete. Amongst the clothes was a clean white scarf and white glasses without frames, I wrapped it around my neck with a smile.

Now it is complete. I think I know a good name for myself. My name shall be Vail from now on.

I walked out of the alley, looking around the town to get a good idea of my surroundings.

I need to find a good cellular tower, I need to send a signal back to my home planet once I find the best vantage point. That should be fairly easy, we've been watching them for a while.

They are always at war with each other, so it might be easy to sneak in and destroy them while disguised as them. Luckily, we can tell each other apart from actual humans.

This town looks fairly small, so I think it could be a good starting target.

I spotted a cell tower barely visible in the distance, it'd be quite a long walk. One big downside to being in this human disguise is that I can't fly.

An automobile sped past me, making me stumble a little. I gritted my teeth and regained my balance. The vehicle was already long in the distance by the time I looked at it.

I continued across the road, before walking along the sidewalk. Before an idea rang in my head. I believe humans use 'taxis' to get around. If I can get some money, I could use a taxi.

The only problem is obtaining it without getting in trouble. Look, I might be on a mission to get rid of humanity, but I don't want to blow my cover in the process.

As I continued to walk I noticed a man in the alley, he was on a cellular device, talking to someone. They were dressed up in black suit with a red tie, slicked back white hair and hazel eyes.

I hid behind a wall so he wouldn't notice me. I got a very bad feeling from them as I listened in on their conversation.

"Look, I don't know what you want me to do about that. I'm not too sure what you are even talking about." He pauses for a second, I could hear him let out a sigh.

"I'm really doing this, huh? Well make sure you have the money ready, you know what happens if you don't." I wonder what he's talking about.

The man walked out of the alley, pocketing his cellular device. He looked over in my direction and squinted his eyes. "What did you hear?"

The man gave me a grin, though I could tell if I said anything else he probably would have acted out in violence.

Now that I got a better look at him, he was quite muscular, even through the suit. He carried a weapon at his side, it looked like some kind of simple looking gun.

I can't afford to make him angry while in this disguise, human skin is so thin.

"Good. Now run along before things get ugly."

I nodded, quickly walking away to avoid making the situation any worse. I moved further on, before going into one of the small buildings, this one labeled "The Cat's Eye Club".

Hopefully this will help me blend in. Maybe I could even make a little bit of money.