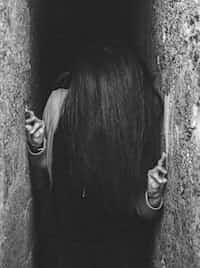 Luke is playing soccer for the orange team. It's only September, but the still, cold, dry air is already swimming through the air.

My Emily and Kelsey and me sit in front of our parents on a purple blanket that's covered in dirt. My nose is red and running and my lips are chap. I can see my breath.

My Emily and Kelsey and I go to the playground that looks like a little us-sized town behind the crowd.

My Emily runs off to play house along with a little girl with pencil blonde hair named Jessica. Kelsey and I sit down on the tire swing that hurts my back with another Emily.

"That school?" Another Emily with the big eyes says, pointing at a building far behind the woods. "That school is haunted."

Kelsey laughs her musical laugh. "No, it's not. There's no such thing as ghosts."

"Yeah-ha, it is. I saw it myself." Another Emily says. Kelsey rolls her eyes and leaves. I don't leave. I'm scared, but I don't leave.

"Kelsey's a scaredy-cat." Another Emily says.

"Yeah." I say, but I don't think Kelsey is a scaredy-cat. Kelsey is the one who kills the bugs and takes out the trash at night.

I can't take the trash out at night because pretend shadows lurk in the dark and threaten to touch my back with their cold hands.

Kelsey doesn't get scared of the shadow people because she doesn't believe in ghosts. I do. I want to hear about Another Emily's ghost.

"Her name was Blue Girl." Another Emily says. "That wasn't her real name, but everyone called her Blue Girl because of her skin. She had a rare condition that made her skin blue.

She was made fun of for it but tried out for the cheerleading squad. But the cheerleaders locked her in the bathroom stall, the last one that never closes, and she was never seen again."

"That's not very scary." I say, although I can feel the shadow people trying to touch my back.

"Legend has it, if you go to the last bathroom stall that never closes by yourself, the door will close and wont open till your dead."

I look at Another Emily and believe everything she says. I am scared.

What was Blue Girl's real name? What was her skin condition called? Could I catch that condition? Will my skin turn blue? What if she haunts every bathroom instead of one?

Another Emily can see the fear in my eyes. She laughs, but its not a musical laugh like Kelsey's or a squeaky laugh like My Emily's. It's a slow, guttural laugh. The soccer game is almost over.

The sun has set and my hands are numb. I shove my white fingers into my mouth to keep them warm. Another Emily is called back to her family.

I sit on the tire swing that hurts my back, watching My Emily play with Jessica and feeling the shadow people creep up and around me.

My mother calls me back to her. I run and run and run until I am with her and don't turn around to look at the forest.

Blue Girl is there with the rest of the shadow people, waiting for me to look at her.

To this day, I never go into the last stall of the bathroom by myself.