Commaful
The Vanilla Ice Cream of My Heart (Part 10) 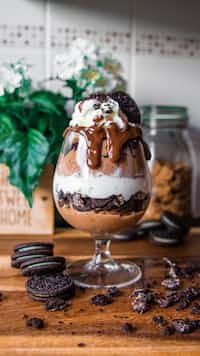 The Vanilla Ice Cream of My Heart (Part 10)

It has been a few months since Alan and Jared moved to New York, and Thanksgiving is close. Jared is in the make up room that night preparing to go on stage to open the night for some queen that is in a drag race next season.

Joanie is quite popular in New York, but Jared still does not want to make it as his main job. Mainly because he is not comfortable flirting with all this men while Alan is watching too.

Alan is fully supportive if Jared wants to do it full time. He even ask if Jared want to transitioning to female. But Jared does not want that, he still enjoys his life as Jared.

That night Joanie put on a red short dress with a pretty long blonde hair. Alan is admiring her from behind sometimes he slipped his hand to Joanie's back and rubs her.

Joanie feels lucky that Alan is this supportive. Joanie slipped on the high heels that Alan gives her. She kissed Alan before stepping on to the stage.

Alan always think that Joanie have one of the best voice of all the drag queen he ever seen. Well, maybe because he is in love with Joanie. Joanie looks like the most beautiful women for him too, basically Joanie is perfect for Alan.

Alan knew sometimes Jared doubt that he stay together with him because Alan loves Jared or Joanie, but Alan loves them both. They have a rough start on their relationship but the longer they are together the more in love Alan is to Jared and Joanie.

Alan was contacted by Eva a few days ago, she invited Alan and Jared for Thanksgiving with them and she promised that Jeremiah wants that too. Clara has been staying with her kids on Alan's place and work for Alan's ice cream shop too.

Jared even give Alan some money to give Clara more money as her salary because at the end of the day Jared does not want his niece and nephew to live in poverty.

Alan have not told Jared about the invitation and Thanksgiving is only less than a week ahead. He planned to tell Jared after his shows because usually Jared is in a good mood after the show.

Joanie perform two songs before she hand the show over to another queen, she mingle for a little and got her tips from a few gentleman. At least two of the men that she was talking want to bring her home. This is one of the side of performing that Joanie does not like.

She wants a long term relationship not just a one night stand with a random man. If she start a tour and make this a full time job she will deal with this every day, rejecting sexual offers from her fans. Some of them are very handsome but Joanie loves Alan.

After an hour of going around Joanie told Alan to meet her in the back stage. She grabbed all her stuff and Alan helps to bring it to their car.

"Can we go to McDonald or something? I'm hungry," Joanie say as they settles in. "Sure.." Alan smiles and drive to the nearby fast food that opens 24 hours.

They bought two burgers and fries then headed home. Jared just took off his dress once they arrived at home. It will took him a while to clean himself up after performing and he is hungry. Alan looks at him and chuckles a little.

"You are such a lady, babe," Alan kiss Jared in his cheeks. "I'm the manliest man you will ever see," Jared say as he stuffed his face with a burger.

"Well, you do not look like it at the moment. But I believe you, because you are so pretty," Alan slide his arm to Jared's hips. "I love you," Alan kiss Jared's cheeks. "Hm.. Mmpph muu poo" Jared try to say I love you too with his mouth full.

"Hey, babe.. I need to talk something serious with you." "Hm? What is it?" "Um, your mom ask us to join Thanksgiving dinner in your hometown."

"I'm..." Jared sigh. "Can I think about it?" "Well, your hometown is 8 hours drive. We can drive there, because I think it will be hard to get tickets now. Your mom just told me yesterday and I figure we better drive if we want to go there."

"I'm fine with driving. But I don't know if I want to get back there," Jared sighs. "I know, babe. Take your time," Alan kiss Jared's lips.

Jared decide to call his dad the next day. His dad did not answer the call, so he decides to call his mom. Eva answer within a few rings, Jared guess that she knew he calls his dad earlier.

"Hey, Jared. How are you? I missed you so much.." Eva say right away. She sounds like she is whispering. It makes Jared wonders. "Mom, Alan told me about your invitation. Does dad knew about it?"

"Jared, you are our son. I missed you so much.." "I know mom and I missed you too. But please tell me the truth?" "Clara knew I ask you to come. Your dad.." Eva stops.

"Mom.. You were 8 hours away, I can't just travel that far then got thrown out from your house on Thanksgiving." "Jared..."

"I know, Mom. You missed me, but I can't just show up. How about this, I go there and we meet Friday morning? I will be staying in the inn because I rent out my place and Clara stay in Alan's place." "I can ask Clara and her kids to stay here."

"Tell me something, do you love Alan? Is he treating you well?" "Alan is lovely, Mom. I love him so much. He might be younger than me but he is calm and sometimes more mature than I am. Did Clara told you that he is the one who help her? I initially does not want to help her after all the thing she did. But Alan just help her and forgive her."

"Of course not. He is not stupid. He took off with a hundred thousand dollars of our saving." "How did he took that money from you and dad anyway?"

"We were stupid.." Eva stops. "He told us that he needed money to fix his marriage with Clara. He wants to buy Alan's shop and you know, your dad hates Alan." "I'm sorry, Mom.."

"We are fine. I supposed." "Do you need money? I don't have much but I can give you and dad my savings." "No.. We will be fine, Jared. Just take care of yourself and Alan. I will see you next week?"

Jared was so angry with George after that call, but he blames his father hatred for him and Alan too. He told Alan the plan for next week and Alan said he is fully supportive of whatever Jared decided.