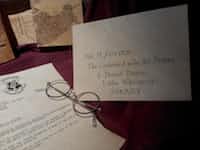 elleseng new poem or contest battle? dm me which!
Autoplay OFF   •   a year ago
Transcript Use Images
Welcome back to Ask Harry Potter, where the HP characters will answer ANY question!! With @bookishtween13!
funny harry potterinterviewquestionsfanfictionfan fictionfunnyanswers2020 most romantic harry potter fanfictionfunniest questions fanfiction

Hi everyone, and welcome back to Ask Harry Potter!

Elliott: Harry, why didn't you ask Ginny to the dance, instead of going for Cho and getting dumped?

Harry: *looks nervously at Ginny* I didn't ask Ginny, because I didn't like her then.

Ria: Harry, do you feel guilty that a lot of people especially Fred Weasley died saving and fighting for you?

Harry: Of course I feel guilty! *gets a little upset*

Elliott: Draco, why did you hate Harry so much?

Draco: Because little Potter always felt soo sure of himself, always playing the "hero". *scoffs*

Ria: Harry, how has the ship with Draco affected your relationship with both him and Ginny?

Harry: People ship me with... Malfoy? Uh, what?

Ginny: Be aggressive and don't be afraid to knock anyone off of their broom!

Ria: Draco, do you ship Drarry?

Elliott: Ginny, who's your favorite brother?

Ria: Fred and George, can you guys please teach me your ways, you both are my pranking idols.

Elliott: Hermione, how often do you think "I'm surrounded by idiots."

Ria: Snape, were you ever inspired by Gordon Ramsey? You kind of act like him when you're teaching Potions.

Snape: That muggle born? I most certainly think not.

Elliott: Well, that's all for now, guys! We'll ask you 10 more questions next time. If you *gestures to viewers* have any questions to ask the Harry Potter characters, comment them below!