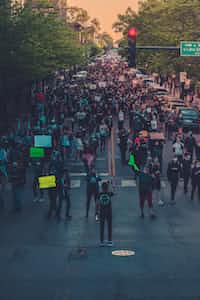 dreamtime I'm dancing with a shy bird
Autoplay OFF   •   4 months ago
Transcript Use Images
A reflection of America.
poetry social+justicesocial justice

They shatter melanin with bullet shells, waving a shredded flag.

The red stripes pooling like blood around my feet. The ashes shrouding the sky, blocking the brilliant blue.

A piano echoes through prison cells. The notes trail of memories.

Of moonlight And mothers' smiles And better days.

Before the noose That hung the sun fell. And before men plucked stars from the sky, keeping them in small jars And leaving the world devoid of light, swamped in blackness.

Before all the world turned its back. And the moon turned to its shadow. And all the planets fell out of their orbits, tumbling into chaos.

And all man watched the wicked. Comfortably. Behind the castles they built for themselves.

Before all of this, to a time when sons were just sons. And fathers just fathers. And mothers just mothers.

To a time, when people were just people. To a time, when we could laugh and look up at the brilliant sky And ponder the absurdity of everything. Free.