Commaful
In the streets of Madrid (part 6) 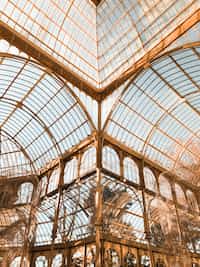 dreaminnlivin _keep shining_
Autoplay OFF   •   a month ago
Transcript Use Images
Would he let her in? Could he?
romance romaceromanticboygirlrelationshiprelation shiplovetrust most romantic relationship stories

In the streets of Madrid (part 6)

Just like that, it was as if my whole world collapsed, and she was just sitting on that wall and looking straight at my eyes.

Out of nowhere she asked me to go for a walk. For the first time I said yes without thinking about it.

I got a text message so I held her by my side. "Do you want to go to a panoramic sight? Some friends called me."

"You know what, we could." I didn't expect her to trust me so easily, but than again, we were getting to know each other little by little. For a while we were not strangers.

I texted Leonel that we'll be going too. "We'll leave around five pm. Take a camera with you, so you won't regret it later."

"Deal, I'll take it. Who was the woman you said goodbye to? You don't look that much alike but you're close. Sorry for sticking my nose where it doesn't belong like that, I shouldn't have."

"it's fine, she's my aunt, she was my guardian. And only family that I know. Though I think I have some more cousins in Serbia."

Everyone thinks that I'm a very dark person, not easy to talk to, but it's like that just until they earn my trust. Than I become a pretty chatty person. Sometimes I even talk about mum.

"Would it be too much if I asked what happened to your parents?" "now it won't. My mum died in birth, I was six I think, and my dad, I never met him.

He was one of the tigers. Some organization in Serbia. I never managed to catch the treads if they were good guys or bad guys. All I know is it cost him his life."