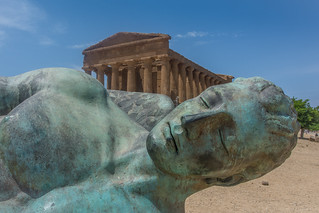 Icarus loves the Sun. When it shines, and when it goes.

Icarus loves Apollo, the god of the Sun.

Icarus grew up with the tales, and he fell in love with them; with him.

When Dedalus gave Icarus wings to fly (but not to close to the sky) he knew he had to try. Afterall, what would he be without his god?

Would he be as bright as the Sun? Would he shine as much? Would he be friendly and welcoming just like the Sun he had in hands?

Icarus flew too high. And he fell. He fell in love; he fell from the sky.

Icarus loved the Sun. When it shined, and when it went.

Icarus loved Apollo, the god of the Sun. But he's dead now, and Apollo never knew and never will.

Dedalus told him not to fly too close to the sky. But he did.