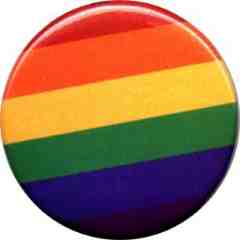 I have this little part of me

that manifested physically, that I can hold between both of my hands, perfectly. Just the right size so that no one else can see. It's a little dented, inside and out.

I found it on a street corner,

but in reality I'd found it four years ago, right behind another girl's eyes. It was as beautiful then as it is now,. Pink, purple and blue flowers cracking concrete just to show they exist.

But somehow I'd know then as I know now that hiding it, was the only way it could stay around, stay proud, stay loud.

Flash forward to the morning, when the panic stuck in, because that little pin had found its way into my mother's trash bin.

A little piece of my personality, confronting reality without me. It was just as confusing then, as it is now.

These are the times I realize, she might even support me. If I took the chance to let her see, but with the news of death threats and hostility, honestly, honesty doesn't come naturally.

I had explained, given up a thousand reasons, like sand, cause they just slip from my fingertips. She had accepted it.

Gone with her day, but mine had exploded with hundreds of attacks within the first hours, with a body count of one.

Unless you, can still see the imprint of my corpse every time it would collapse unto my bed, like I do. Then it would seem like I've lost continents of people within me.

And even past today,

there will always be the little snips of self-hate, the shrapnel in your skin after the explosion, with the same kinds of scars to prove you may have survived at all.

Or maybe you're dead but you just can't seem to prove it to everyone yet.

I made sure to throw it out in the neighbor's trash the next day, just like all the other pride parades.

But if the pieces don't matter who's to say the whole does either,