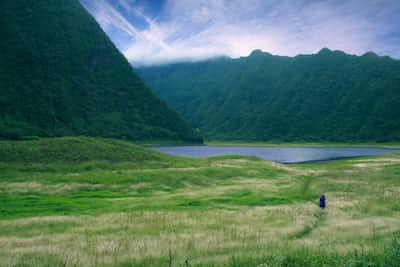 bookworm123 My life is a meme
Autoplay OFF   •   3 years ago
Transcript
I know this is late for the prompt, but I only got the idea today, soo
fiction journeyvillagedeatholdshadowlifetravel

He was born at night. No light were to be seen in the small village. A baby's first scream broke the deadly silence, marking the beginning of a new life.

He was named Shadow.

As the years passed, Shadow grew up. With his hair as black as ink and his face as pale as the moon, he scared the villagers. He was child of the night. Those kids never brought anything good.

At the age of 18, Shadow was banned from the village by the mayor. They could no longer have him around. He scared them.

His mother felt bad for him and therefore she told him where he could stay. "Go as far to the West as possible. When you legs can longer walk, your journey is over. There you will stay, son"

Though Shadow never listened to anyone he respected his mother, and so he followed her instructions. He went as far to the West as possible. He was about to faint, when he saw a village close by.

He went to the village. No people could he see. He came all the way to the town square without meeting anyone.

In the center of the square was a mirror.

He went to look in it, and what he saw made him collapse on the ground.

There, looking right back at him from the mirror stood an old man. His hair and beard was white as snow, and his skin was filled with wrinkles.

Shakingly, Shadow stood up and touched the mirror with his fingertips. The could surface gave him a message stronger than words could ever say.

He looked himself in the eyes. Their night-black color hadn't changed. Realization dawned upon him.

He opened his mouth to speak for the last time.

"My journey is over"