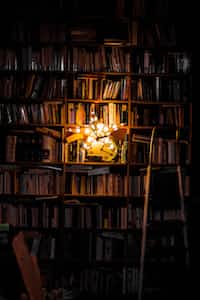 bookishmuggle 🐢🐢🐢🐢🐢🐢🐢🐢🐢🐢🐢🐢🐢🐢🐢🐢🐢🐢🐢🐢🐢
Autoplay OFF   •   7 months ago
Transcript Use Images
Chapter two of my story about the inkdragon!
fiction dragon@inkdragoninky and izzyfantasyfictionshort storyshortstoryseries

Inky and Izzy-Chapter 2 By Mari This is chapter 2 of a series. If you haven't read chapter 1, then this won't make any sense. Link in comments!

Izzy woke to the colors of the sunrise spread across her bedroom wall.

She pulled back the covers and stepped out of bed, but she couldn't go any farther because of the huge pile of books in the center of her room.

At some point during the night, all of her books must have magically taken themselves off the shelves and piled themselves into one huge mountain that came up to her hips.

The inkdragon rested at the very top.

Izzy flicked his head. "Hey, you."

Inky jumped to his feet and immediately fell off the pile, landing at Izzy's feet. He rolled onto his back and looked up at her innocently.

"So all of my books just magically floated off the shelves last night and arranged themselves in the middle of my room?"

"Inky! I had these organized alphabetically!"

Izzy rolled her eyes and inched between her bed and the pile. "I'm going to school. These had all better be back on the shelves by the time I get back."

She quickly got dressed, grabbed her backpack, and walked downstairs.

The bus was filled with wet and noisy middle schoolers. Izzy expertly dodged spitballs as she walked down the aisle.

She planted herself into a seat next to a boy reading a comic book. A small squeak came from inside her backpack as she plopped her bag on the ground.

Izzy froze for a second before pulling her backpack off the floor and onto her lap. The moment she unzipped her bag, a small black head poked out and gasped for breath.

She shoved the inkdragon's head back into the bag before anyone could see him. With a groan, she realized that it was too late to take him back. The bus was already moving.

Meanwhile, Inky kept trying to crawl out. She blocked him every time.

The comic book boy looked up from his book and saw her talking to her bag. He raised an eyebrow. Izzy chuckled awkwardly.

"Oh, I was just, um, talking to my.... my pencil case. It's being super aggravating today."

The boy nodded slowly and returned to his book.

Izzy grabbed her back and dashed off the bus the moment it reached the school. She looked around for a secluded area, finally finding a large hedge to hide behind.

She unzipped her bag and pulled Inky out, who was gasping for breath. "Oh, come on! You can breathe just fine in there! I have a rip in my bag."

Inky glared at her.

"Why are you here? I told you to stay in my room and clean up my books!"

"I can't take you to class! Do you have any idea what would happen if someone found you? They would probably donate you to science! Or put you in a zoo!"

Inky cocked his head to one side.

"That means no more books or chocolate ever again!"

Izzy placed him back in her bag and stood up. "I'm going to go inside, and you can't come out. Not until I say so. Understood?"

He looked up at her from inside her bag and nodded.

Inky was surprisingly well behaved for the whole day. He didn't make any noise or come out or draw any attention to himself whatsoever.

There was a fire drill at the very end of the school day that was slightly worrying. Izzy wasn't sure if he was going to try and follow her or do something naughty.

But when she came back, he was still there.

Izzy stepped off the bus and walked up to her house when she noticed that her bag felt much heavier than usual.

It's probably because I'm tired, she thought. It had been a long, stressful day.

She opened the door and unzipped her bag. Inky hopped out and raced to the top of the book pile. Izzy smiled.

"I'm going to get started on homework. If you could keep it down, that would be nice," she said to him.

She reached in to pull out her binder, but her hand brushed a book that she didn't remember bringing. Her hand closed around it and pulled it out.

"Since when do I read The Hobbit?" She went back in for her binder, but pulled out more and more books that she didn't put in there.

"What...?" She looked up at Inky, or rather, his head, which was poking out from the top of the pile of books. He was staring at the books in her arms. "Was this you?"

His eyes widened as he jerked his head out of sight.

"Inky! Was this you?" Izzy demanded as she walked around the pile of books to confront him. "When did you do this? Wait, it was during the fire drill, wasn't it?"

He looked at his feet.

"Why can't you be a normal dragon who hoards gold? Actually, no, forget I said that. I would much rather you rob the library than the bank.

But that doesn't make it right!" she said, pointing an accusing finger at him.

He flinched at her movement and dashed under her bed.

Izzy pulled her hand back. "I... I wasn't going to hit you." She dropped to the ground and peered under the bed. Inky was curled up in the very back, trembling from head to toe.

Inky wouldn't look at her.

"Do you want chocolate?"

He relaxed slightly and peered at her, nodding slowly.

Izzy dashed downstairs for a chocolate bar. By the time she came back up, Inky had added his stolen books to his pile. She unwrapped the chocolate and handed it to him. He scarfed it down.

Once again, she noticed the scars that ran all over his body.

She reached out a hand to stroke his skin. "What happened here?"

Inky hissed and ran to the corner.

He slowly crept back and sat in front of her. Chocolate was smeared in the area around his mouth.

"Did someone do this to you?"

"Was it another animal?"

Inky pointed to his chest.

Inky shook his head rapidly and pointed to himself again. When she still didn't understand, he jumped onto her bed and grabbed "The Wizard's Revenge". He handed it to her and pointed to the cover. A brilliant red dragon took up most of it. Its teeth were bared and fire was spewing out of its mouth.

"There were other dragons? Are they still out there?"

"Wait, do they still want to hurt you? Is that why you were living in the library? Are they looking for you?"Izzy asked, dreading his answer.

He nodded once again.

Thanks for reading guys! I hope you liked it! @papaya_grl619 suggested the name "Inky and Izzy" for this series. I like it. I think it's cute. What do you guys think? The other option is "The Inkdragon". Also if you would like me to tag you when future parts come out then please let me know. -Mari <3