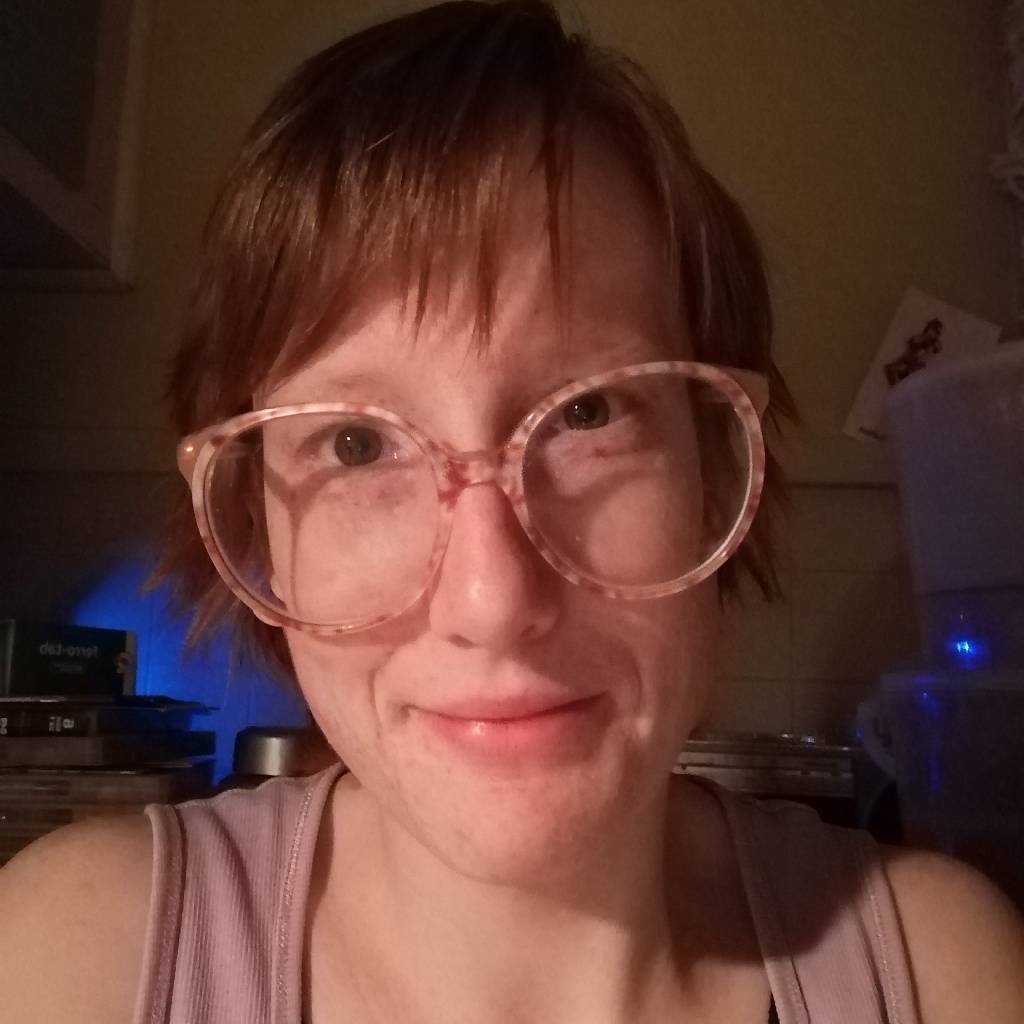 ausynn Writer from rural Victoria, Australia.
Autoplay OFF   •   7 months ago
Transcript
A reimagining of the myth of Nerthus.
fiction alternative mythologygermanic paganismfantasywlw

The first of the early dawn rays reached jubilantly through the bare, gnarled trees and glimmered upon Nerthus’s creamy, unblemished skin as she tread barefoot upon the land, the dust taking up residence inside her pores, closer to her bones.

Beside her tread her consort, the empathic one, Alvilda, her dark hair whipping eel-like in the breeze, and farther back, at some distance, Nerthus’s troupe, those that, together, Alvilda and she had summoned to duty from beyond the veil of worlds.

In front rode the first of Nerthus’s escort, those of living breath and flesh who worshipped the goddess and lived to abide in her service, and behind still more men on horses, leading the way for her troupe pulling the cart, transformed with the daylight into gently stamping heifers, raising dust at their hooves.

The day was too good a day, the sunlight upon her skin too warm and delightful, for Nerthus to even consider riding in the cart, so she tread on, sprightly, drinking in the land around her, the trees and grasses and other foliage, the creatures that inhabited this world of changing seasons, and hummed softly the sound of flowing water.

Soon, her troupe would come upon a sleepy village blinking its eyes open tentatively for the day, one of many, many villages throughout this region, and the goddess would set to work. She had a difficult task ahead of her, readying the wombs of the ravaged for childbearing, but she knew herself competent, so she did not linger upon worrying thoughts.

Then, once their waters were purified, once they were once more able to sustain life, and Alvilda had blessed these vessels so that they might receive those spirits ready to enter the changing, colourful world again,

Nerthus would have her men tell the women to go home to their men and celebrate, and make young to prosper and grow and repopulate this land with those of understanding, harmonious hearts who would live with nature and seek not to conquer but to commune, to befriend, and coexist.

Her work done, Nerthus would set off at the conclusion of the celebrations and venture forth to one more village in need, and for as long as she walked this earth, her consorts would walk with her.

For now, Nerthus enjoyed these moments she walked upon ground and smelt life in the air, the soil, where she touched it, transforming from dull and unforgiving ground to fresh, ready earth, ripe for life to begin anew.

She savoured the whip of the cold wind against her pale, frosty cheeks, warmed only slightly by the rising sun, and the slash of hard rocks against the bottoms of her feet. She walked where she favoured to walk, ventured where she felt a need for her healing energies, and breathed deeply.

She was pleased to have the dark-eyed Alvilda accompany her, silent but for her steady, rhythmic sighs, her chest rising and falling gently with each breath, pleased to hear the stamp of hooves softly echoing in the distance, of horse and cow, the voices of the men riding low and whisper-like upon the breeze.

The villages smelt different, smelt overridden and busy, but she liked it out here, she liked these times when she walked with Alvilda and the troupe and the sunlight was not burning but warm and caressing like the touch of another’s skin.

She and her troupe had been to five other villages thus far, all of them quite small, numbering no more than a hundred or so people in total.

The tour was just beginning in earnest now, the villagers who had not been certain of her return now casting aside their doubt at hearing the stories of these other villages she had visited upon and lifted from the ailments of the ravaging curse.

They were excited to hear of her coming, and happy to have her, and she was pleased to come, pleased to walk their land, to hear their tales, their songs when they rejoiced, pleased to touch them and feel their solidness underneath her fingers, warm and dry.

She had healed some men, but it was the women who needed aid of her gift more, for without her healing they could not bear offspring, a result of a recent war, she had heard, that she vehemently despised. When she came to their villages, the people did not mention war or its kind, and they did not scrabble or raise heckle over her services.

They rejoiced, they celebrated, they were joyous. She was much gladdened by this fact.

She did not enjoy the tales of war and carnage, and she knew, too, that it troubled her friend, Alvilda, who could not help but wonder of the fate of those souls taken in battle, who had themselves taken the lives of others, could not help but trouble her lip ’til it bled in trying to hold back her tears of anguish: what was the necessity of all this?

When the troubles of the world overtook Alvilda such that a fierce darkness reigned inside her soul, Nerthus would arrive to lend her warmth and light, to give her happiness once more, and she would return that happiness in turn,

tearfully, at first, and then joyfully, the roughness of her fingernails scraping against Nerthus’s flesh soothed by her gentle kisses and small, caressing hands, warm and solid and only a little shaky.

Secretly, Nerthus treasured these times the most.

She understood they would not last in the same manner that her gift, her healing, would last.

They were dependant upon a need, another’s presence, another’s actions, upon some strife she disliked so; upon Alvilda staying by her side, upon these tours she often walked, venturing far from home, with the single thrill not so much a thrill, a thing of wonder, but the promise of fulfilling her destiny, of putting her gift to good use.

She did not exactly relish these tours, but she had learned many years ago to find thrill and wonder in the feeling of the sunlight, in feeling the sun’s warm glow in a manner she did not, could not, back home.

But this, holding Alvilda, comforting Alvilda, this was different. Different, even, to the warm glow of healing the flesh. This was a thrill – a wonder definitely!

In the dark of night, snuggled close to Alvilda and her warmth, Nerthus only wished this – her few moments of true happiness – wouldn’t be so tinged with bitter-sweet aching for what horrors had come before, and she fancied that, if she could have anything she desired,

she would desire that when this tour came to an end, as all those before that, she could perhaps salvage some of that wonder, perhaps hold on to some of it, with Alvilda.

In her heart, she knew these fancies were merely dreams, dreams that could not come true, and so she didn’t dare utter the word “love”, didn’t dare hope for anything more beyond these moments they had, fleetingly, in the dark.

And when she looked upon her consort in the light of day, her dark hair more luminous in the sunlight, she didn’t dream of holding her, of kissing her, of healing her.

She was merely glad for the other’s friendship, for someone to walk beside her as she tread this path she had been set upon by fate. And sometimes, in the dark, when she dreamed of the darkness that had once plundered the earth and the horrible things that had befallen this world at the hands of these people she healed,

even then, sometimes she hated herself for so enjoying her times with Alvilda, for longing for more times such, but she never, never hated the other woman.

The celebrations made her happy, too. The people did not fight, they were glad for one another’s company, and this, most of all, made Alvilda happy. And when Alvilda was happy – the woman Nerthus refused to admit to herself she loved – Nerthus was pleased, most pleased.

Only now did she fully understand.

She had not always loved her gift, the way it took her away from home and loved ones for so long a time, but now she thought she did love it – and now she dreaded the time she would return home and Alvilda and she would be separated to walk their separate paths, each laid down by fate with the best use of their unique abilities in mind.

She did not want to leave Alvilda, but she would. In the end, she would return home. And she would fall in love again, she was certain. And whenever she walked the earth and healed its peoples, she would remember her love with fondness and warmth in her heart.

Nerthus walked into the village smiling, the breeze light on her face, her golden hair glowing softly in the sunlight, with Alvilda by her side – smiling, too. The villagers welcomed them happily into their homes and offered them their hands to hold.