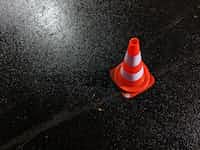 astralphoenix My new account is @hermesofolympus
Autoplay OFF   •   a month ago
Transcript Use Images
A story which I decided to share.
thriller

Donald checked the time on his wrist watch as he sped along the highway.

And the soccer match which he wanted to see was starting at exactly 5pm.

When he lifted his head, he saw an orange blur coming from his right, and in a split second there was a violent jolt,

then the bicyclist rolled across his hood and fell out of sight on the pavement.

Horns blared angrily and he panicked, stepping on the gas and screeching away from the chaos

He was shaken and he kept an eye on his rearview mirror until he got home.

Donald sat in his living room. He was no longer interested in watching the soccer match.

He had just hit a person and ran away.

If anyone recognized him or his car, he was going to jail.

Who was going to take care of his wife and son.

He was not going to tell anyone about this.

Just then he heard a knock on the front door.

They found me. He thought. His whole body was shaking and sweating.

Should he run away?

Should he run away? No. They'd find him.

He got up and unlocked the door.

There was a police officer.

There was a police officer. "Are you Mr Jones?"

"I'm sorry but your son was struck by a hit and run driver and he died on the spot."

"I'm very sorry for your loss"