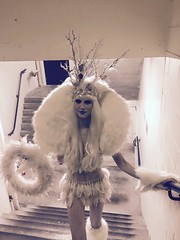 The snow queen is like a snow flake. How long has she lived in a blue fairy tale? Who is she and why is she there? The snow queen is neither pale nor fake. She is as white as a winter lake. A Christmas tree is lit beside a lamp shade. A pine tree is as green as jade. She’s a queen on a winter’s sledge. She would melt being a soft snow lace. She would be a snowdrop or something else. The snow will melt to bubble a river’s face. The fable will end on its last page. The queen would be kept by emptiness on a legend stage. The queen would touch nothing though she was sage.
poetry prose poem prose poem poems

THE SNOW QUEEN By Anahit Arustamyan

by arustamyananahi The Queen Of Metaphors available on Amazon.com