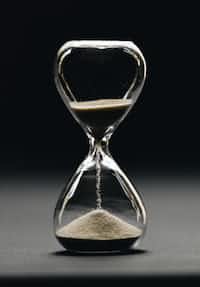 aprid11 Community member
Autoplay OFF   •   a month ago
Transcript Use Images
Even Time can suffer from a broken heart.

She stood at the edge of the empty graveside, urn clutched to her chest as the steady stream of well wishers filtered past.

She heard none of the whispered condolences, saw none of the faces filled with pity. All of her attention was zeroed in on the burden weighing her arms.

It mystified her how someone who was once so solid could be reduced to something so insubstantial in a matter of hours. It wasn't supposed to be like this.

Unbeknownst to her, tears trailed down her face. Mourners who sought to give her comfort flinched away from her dead expression and the chill emanating from her arms. She didn't stir.

They were supposed to have more time together. That was what she was promised. One by one the company faded away, leaving her in solitude amongst the graves.

A sober man armed with a shovel approached her. Clearing his throat with a cough he tenderly broke the silence.

"Miss... It's time to let him go now." Her eyelid flickered.

"No," she rasped. Clutching the urn even tighter to her chest. "I'm not finished with him yet."

Spinning on her heel she stalked away through the stones; leaving the man gaping like a fish when she disappeared through a hole in the air.

Her heel came down on solid tile without a sound; her marching steps stealing across the room to a faint glow.

Coming to a halt at the edge of a swirling pool filled with shimmering vapors, the woman uncorked the ceramic urn in her arms.

With great care she poured fine ash into the depths which continued to swirl as if nothing disturbed it.

The woman set the urn down with a thud. The first sound emitted in the void of the Room. She crossed her arms in front of her.

"I gave you my heart. In return you were supposed to give me your soul. Explain yourself. Why have you left me?"

From the depths of the pool emerged a man. A smiling man, with disheveled hair and narrow shoulders. The knuckles on his hand stood out in sharp relief as he reached out to caress the face of his wife.

"That is the nature of humans, my Heart," he admonished gently, running a thumb along her cheek. She leaned into his touch as he caught her tears. "We live. We die. You know that better than anyone."

Her bottom lip trembled. "I know that." the snap of her voice was betrayed by its quaver.

"But you gave me your soul," she whispered "You should be there, not here. Why are you here?"

The man gathered her in his arms, petting her hair smooth.

"Souls cannot linger, no matter who they belong to," he explained softly. "Never doubt it, my Heart. My soul will always belong to you."

The woman pulled away from her husband to look him in the face. Bitterness framed her features.

"What good is owning your soul if you're not with me?" she demanded of the man, hands knotted in his shirt. Chuckling, he gently untangled her fingers.

"A heart and soul cannot remain separated." He brushed her fingertips with his lips. "I will wait for your arrival here."

Her tears dropped soundlessly into the swirling vapors as her eyes widened in horror. "But that will take forever," she whispered.

The man lifted a single shoulder in a shrug. "One day the world will end and time will no longer be needed," Grinning, he swept his arms wide.

"When that happens, I will be here. Ready to return your soul to you."

The woman sniffed as she dashed her tears away with her wrist. "Can you promise me you'll wait that long?"

The man reeled her in close. "Of course my Heart." he promised, laying a kiss on her lips. "After all, I have all the Time in the world." Fin.